Vacuum carburizing or LPC, neutral hardening, oil or HPGQ (high pressure gas quench), vacuum pumps, graphite insulation, radiation shields or ceramic insulation, graphite or moly heating elements — these are some of the processes and equipment options OEMs and heat treaters have to evaluate to determine the cost benefit for a specific component or heat-treating system if vacuum is being considered.

Likewise, if atmosphere hardening and carburizing are in the picture, additional choices must be made. Does production demand a continuous or batch furnace, brick refractory or ceramic modules, endo generator or nitrogen/methanol, electric heat or gas-fired radiant tubes? If gas, should you pick straight SER (single ended radiant) or “U” tubes? Should tube material be heat-resisting alloy or SiC (silicon carbide) ceramic? Finally, is fuel-saving recuperation cost effective?

To enlighten the reader, and hopefully assist those charged with making the choices noted above, I’ll provide an examination on how each item can affect the overall process outcome.

Carburizing has been around in various forms for centuries. The primary reason it has survived as the most applied heat-treating process is its ability to improve the strength and wear resistance of the widest range of, and the least expensive, steels.

Each insulation configuration was primarily directed to a specific industry. Radiation shields produced a very clean but inefficient (high heat loss) atmosphere, and found application in brazing where no contamination could be tolerated. Ceramic-insulated (more efficient) chambers found their way into the heat-treating arena for tool hardening and for less critical brazing applications.

Vacuum pumps in the early days employed a mechanical roughing pump (generally the sliding piston type) and an oil-diffusion pump. Since scientific research propelled vacuum-furnace development, it likely provided the concept for the heat-treating segment — thus the perceived need for the diffusion pump. In addition, since graphite had not yet been used as an insulation material or heating element, diffusion pumps provided the lower oxygen concentrations needed for scientific research. As pumping systems matured, the “roots” booster replaced the diffusion pump in heat-treat applications. As graphite insulation and heating elements became accepted in the 1970s, the booster became even more popular. Since graphite was a much more effective getter for oxygen than moly or tungsten, very low vacuum pressures were no longer needed to keep steel bright during heat treatment. Evacuation times also were drastically reduced since the higher-capacity booster could be introduced at much higher mechanical pump pressures.

Oil diffusion pumps are actually traps. They operate at vacuum levels where the mean-free path of air molecules is so long, only by happenstance do they bounce into and are captured in the pump inlet, reducing the pressure. Therefore, to function properly, their inlet must be as large as possible. If the potential for back-streaming diffusion-pump oil into the furnace poses a problem, the only option is the turbo-molecular vacuum pump. These pumps operate like a jet engine’s turbine blades but rotate at extremely high RPM — 20,000 to 50,000 is not unusual. By shear forced convection even at low air density, they reduce the pressure after the roughing pump has lowered the pressure in the vacuum chamber. They are expensive and costly to maintain. If extremely low water vapor is required in the vacuum system, the cryo-pump is the solution: It functions as the third stage of either the roughing plus booster, or diffusion-pump combination. As the name implies, cryo-pumps are a cold trap using liquid nitrogen at -321 degrees Fahrenheit (-196 degrees Celsius) in which water vapor molecules condense onto a substrate and reduce the pressure.

Oil diffusion pumps had another problem: They can catch fire if operated incorrectly. That issue was solved with the development of synthetic-based silicone oils.

In general, today’s vacuum furnaces are the batch type — one load at a time into one hot zone. In the late 1980s and ’90s, multi-chamber vacuum furnaces tried to increase production, but the complexity and maintenance cost drove them from the industry. Smaller semi-continuous versions can be found, but they do not have the capacity of the atmosphere pusher or mesh belt furnaces. And they are complex.

LPC (low pressure carburizing) and outgrowth of vacuum carburizing is the result of carbon reduction of a high concentration at the steel surface. Once the surface carbon target is assumed to be reached by calculated algorithm, diffusion reduces it again to a calculated target. Only after the process is complete can you determine if the process was successful. Therefore, trial and error is the only method that can be used to produce confidence that a recipe has worked.

The most effective and by far the greatest portion of heat-treating processes enjoyed by vacuum furnaces is neutral processing, especially for brazing and hardening high-carbon tool and die steels. But there, too, some caution is warranted: At low vacuum pressures, pure elements can be vaporized from the material surface; the most common is chromium. In some cases, decarburization has been detected when the surface of steel or stainless steel is being pre-treated prior to brazing or plasma nitriding. This can occur when a partial pressure of hydrogen is introduced at elevated temperature to “clean” the material surface.

Two segments comprise atmosphere or endo carburizing furnaces: batch and continuous. Each of those two segments can have either brick or ceramic fiber refractory insulation. As such, the practical high-end temperature limit of the endo carburizer is 2,100°F (1,149°C). Obviously, there are brick refractories that can operate up to and above 3,000°F (1,648°C) but for carburizing, 2,000°F to 2,100°F (1,093°C to 1,149°C) is the practical limit for fiber and brick. Which material is chosen depends on one’s personal preference, however, brick will generally last about 10 years while ceramic lasts five to seven. Very high carbon potential will always require brick lining. Ceramic fiber has the advantage of less heat storage, making short cycles with plunge cooling between loads more cost effective in time and energy consumed.

In the U.S., with the wide availability of natural gas and its lower cost due to fracking, it is the first choice of heat treaters for heating. Likewise, electricity produced with natural gas has also benefited. As for longevity of heating systems, gas or electric (both if using heat-resisting alloy radiant tubes) can expect similar life when exposed to similar atmospheres. Electric does have the maintenance advantage of clean tube interiors, whereas gas can produce soot that can carburize the tube ID if the burners are not tuned properly, shortening its life.

There’s another decision regarding the style of radiant tube when gas heating: the “U” tube or the straight SER (single ended radiant) tube. There are two competing schools of thought regarding the tubes. SERs consist of two parts — the combustion inner tube and the outer tube. Combustion takes place through the ID of the inner tube with the effluent traveling back to the burner between the inner tube OD and outer tube ID over the recuperated burner assembly. The “U” tube, as the name implies, produces a flame that travels down one leg and up the other leg of the U. These tubes have the advantage of twice the exposed radiation area compared to the SER tube. To produce the same energy output, the SER tube must produce twice the energy density as the U tube, thus it must be made from more expensive heat-resistant SiC material — especially on the inner tube. Another advantage of the U tube is it requires half the number of tubes. Even though the SER can produce very high heat output per tube, in order to provide uniform radiation, more SER tubes are still required, so a “striping” heat distribution can be avoided when SER tubes are spaced farther apart. In some circumstances where one desires to take advantage of the higher output of the SER tube and reduce the number of tubes, a SiC muffle is installed in the furnace hot zone to shield the parts from the tubes and reduce the striping effect.

LPC is a carburize/diffuse process that obtains the final surface carbon by high concentration and reduction. Conversely, the endo gas mix of 20 percent CO, 0.2 percent CO2, 40 percent H2 and 40 percent nitrogen creates a near equilibrium composition between the CP of the atmosphere and the steel surface. The CP of endo gas can be controlled by several approaches and the most recent is the oxygen probe. Before the probe, infrared analysis of CO2 and dew point sensors were also employed. Dew point is still a preferred method for controlling the endo generator gas mix. Since residual oxygen is always present in endo gas, the oxygen probe provides a repeatable accurate sensor that corresponds to the CO2 and dew point reactions. Its repeatability and accuracy are derived from its calibration to the consistent oxygen content of air.

Finally, quenching is the process that produces the strength and hardness resulting from carburizing or straight neutral hardening. For atmosphere furnaces, oil has been the overwhelming favorite simply due to the wide operating temperature range. For decades — possibly centuries — salt has hardened tools and small dies. Then, austempering salts became popular for producing the tough ductile bainite structure for fasteners and cutting blades. Water has been used but primarily where one part at a time is processed, such as induction hardening. Polymer is a water-thickening agent designed to make water quenching more controllable and uniform.

With the continued development of vacuum carburizing LPC, HPGQ became popular with automotive gear carburizing and where distortion control was critical.

HPGQ arrived in steps over time in single-chamber vacuum furnaces employing nitrogen at six-bar pressure, 87 psia; then, 10-bar nitrogen, followed by 20-bar helium that produced hardness similar to quenching in low agitation cold oil. Helium replaced nitrogen for two reasons: It results in faster heat transfer, and used much less fan horsepower. Since helium is expensive, it had to be recycled, and that required additional high-pressure storage tanks and a multi-stage compressor. Recycling helium via all of the piping and transferring from the vacuum vessel inevitably resulted in small concentrations of air mixing with helium. Oxygen scrubbers of various types were integrated into the recycling network. Today, due to the high maintenance cost, helium is slowly going the way of multi-chamber vacuum furnaces with nitrogen again making a renascence. Nitrogen can harden steels but with slower heat transfer, necessitating lower pressure and smaller loads — and/or the steel must have higher hardenability. 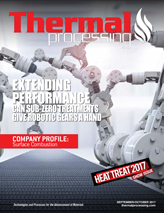 The heat treatment of aluminum – Introduction