After quenching and any straightening, the supersaturated solid solution of aluminum wants to reach equilibrium. It does this through the process of precipitation hardening. Precipitation hardening is the mechanism in which the hardness, yield strength, and ultimate strength dramatically increase with time at a constant temperature (the aging temperature) after rapidly cooling from a much higher temperature (solution heat-treat temperature). This rapid cooling or quenching results in a supersaturated solid solution, providing the driving force for precipitation. This phenomenon was first discovered by Wilm [1], who found that the hardness of aluminum alloys with minute quantities of copper, magnesium, silicon, and iron increased with time after quenching from a temperature just below the melting temperature.

There are many different types of aging available to aluminum alloys. These different processes are designated as “Tempers” and are illustrated in Table 1.

In heat-treatable aluminum alloys (and many other precipitation hardening systems), the supersaturated solid solution transforms along a multistage reaction path. This path first produces Gunier-Preston zones, followed by one or more metastable transition precipitates. After enough time at temperature, the equilibrium precipitate forms.

In many aluminum alloys, the precipitation sequence begins with the nucleation of small, fully coherent phases known as Guinier and Preston zones (discovered independently by Guinier and Preston from x-ray diffraction studies) [2][3]. Guinier-Preston (GP) zones are solute-rich clusters resulting from phase separation or precipitation within a metastable miscibility gap in the alloy system.

GP zones are the first to nucleate because of their small size and coherency with the matrix. The GP zones typically take the shape of small spherical particles or disk-shaped particles that are about two atomic layers thick and several nanometers in diameter. The GPZ generally align perpendicular to the weakest direction of the aluminum crystal structure [4].

As Gunier-Preston zones grow, the incoherency with the matrix increases. Eventually a transition phase nucleates from the GP zones. These precipitates have an intermediate crystal structure between the aluminum matrix and the equilibrium phase. A typical reaction sequence for Al-Cu systems is written as:

where θ′ and θ″ are transition precipitates and θ is the equilibrium precipitate. As each new precipitate forms, the matrix (α) becomes more and more depleted in copper.

The solid solution obtained after quenching starts to form precipitates immediately at room temperature. This process is termed natural aging, and the hardening during natural aging is attributed almost entirely to the homogenous precipitation of solute-rich GP zones.

Rates of natural aging vary widely among the different alloy types. However, the degree of precipitation that exists after virtually stable equilibrium is reached is less than can be induced by precipitation heat treating (or artificial aging) for a proper time and temperature. Consequently, the full-strength capability of an alloy usually is not attained by natural aging. Even so, the mechanical properties of alloys in the T3 and T4 series of tempers are essentially stable and are adequate for many uses. With alloys in the T3 and T4 series of tempers, a substantial degree of precipitation hardening occurs within a relatively short time at room temperature. Examples of response during natural aging for several common alloys are shown in Figure 1.

Alloy 2024 age hardens quite rapidly at room temperature. Most of the strengthening occurs within a day at room temperature, and hardening is almost completed after about four days. This alloy is widely used in the naturally aged tempers: T4, T3, and T36. Another alloy often used in the naturally aged condition is 6061. Alloy 6061 ages more slowly, but the alloy age hardens to a substantial degree at room temperature within four days after quenching. It may be used in the T4 temper, but it is more frequently given a precipitation heat treatment (T6 temper) of artificial aging. Alloy 6061 continues to age slowly for an indefinite period, although for practical purposes the mechanical properties become stable after several months.

The strength of naturally aged alloys can be augmented by cold working. For example, the stretching or roller-leveling operations employed in producing 2024 flat sheet introduce appreciable strain hardening (over 1 percent effective reduction). The resultant higher tensile and yield strengths are recognized by specifications, and the T3 temper designation identifies this product. Additional strain hardening, to 5 to 6 percent, develops higher strengths, reflected in the higher values specified for 2024-T36. Other examples of alloys that are cold worked after natural aging to produce commercial T3-type tempers, are 2011, 2014, and 2219.

In this short article, we have described the basics of natural aging. In the next column, we will be discussing artificial aging of aluminum.

Should you have any questions regarding this column, or any other column, or have suggestions for new columns, please contact either myself or the editor. 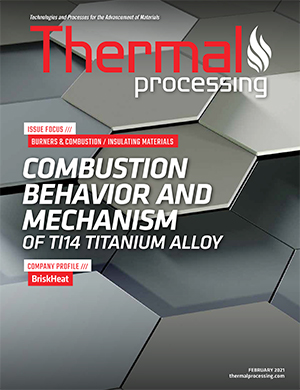