The effect of sintering conditions on the mechanical properties of pre-alloyed
vanadium powder metallurgy steels.

Vanadium is a commonly used alloying element in high strength low alloy (HSLA) steels because it improves strength and wear resistance through the precipitation of vanadium carbonitrides. The use of vanadium in powder metallurgy (PM) steels has so far been limited. A previous study demonstrated that by using a vanadium alloyed PM steel, the total alloying content could be reduced by 50 percent while maintaining similar or improved properties. This study will examine the effect of sintering conditions on vanadium pre-alloyed PM steels by varying the sintering atmosphere and temperature. Different material systems based upon pre-alloyed vanadium steel powders and plain iron powders were sintered in different sintering atmospheres. Mechanical properties and microstructure of each composition and sintering condition will be compared to understand the improvement in properties achieved through the use of vanadium alloying.

Powder metallurgy (PM) steels rely on a variety of methods to introduce alloying elements in order to provide increased mechanical strength compared to wrought steels. The common methods used to introduce alloying elements include admixing of elemental powders or ferroalloys, diffusion alloying of elements to the outside of the base particle or pre-alloying of elements in the melt prior to atomization [1]. It is also possible to use more than one of these methods such as the mixing elemental powders to a pre-alloyed powder or diffusion alloyed powder. This type of material is referred to as a hybrid alloy. The method of addition plays a large role in the resultant microstructure and in turn the mechanical performance.

While techniques such as admixing and diffusion alloying are not able to be replicated in the wrought steel industry, pre-alloying is very similar to traditional steel making methods.

Pre-alloying consists of introducing the alloying elements during the melting process in order to evenly distribute these elements throughout the entire bulk melt. After atomization, the resultant powder particles each have the same chemical composition. This results in a homogenous microstructure after the sintering process [2]. The common alloying elements used with this method include chromium, manganese, molybdenum, and nickel. The downside of this alloying technique is the resultant decrease in compressibility due to the alloying increasing the hardness of the powder particles. The only alloying element which has a negligible impact on the compressibility is molybdenum leading to these families being one of the most popular in use today [3].

All of the pre-alloyed steels currently standardized in MPIF Standard 35 are classified as low alloy steels due to the amount of alloying used. The nominal alloying levels of the standardized materials range from a low of 0.48 percent in the case of the FL-3905 to a high of 3.6 percent in the case of the FL-5305 [4]. In wrought metallurgy, a class of steels has been employed for more than 50 years where generally between 0.05 and 0.15 percent of niobium, vanadium, and titanium are used for increased strength properties [5]. These steels are designated as micro-alloyed steels. In PM, the use of niobium and vanadium has been explored by a number of studies through the addition of ferroalloys or master alloys to a base powder [6-8]. As this technique may require high temperature sintering in order to achieve complete homogenization of the microalloying elements, a recent study showed the potential benefits when vanadium is added using pre-alloyed techniques [9].

In the most recent study where vanadium was added by pre-alloying, improved properties were achieved in a nickel-steel material. The improvement in properties was theorized to be the result of V(C,N) providing dispersion strengthening. Vanadium is of interest for PM due to the majority of PM atmospheres containing large amounts of nitrogen used as a protective atmosphere for sintering. The temperatures at which V(C,N) will go completely into solution is also well within standard PM sintering temperatures. It is established that nitrogen determines both the nucleation rate and density of the V(C,N) precipitates formed [5]. Glodkowki et. al provided an updated graphical model to predict the amount of V(C,N) precipitates formed and the increase in mechanical properties [5]. The model relied on empirical data from a thin slab direct roll mill and theoretical data to illustrate that as vanadium and nitrogen content increase, so do the mechanical properties. Therefore, it is important to understand the effect nitrogen content in the sintering atmosphere could possibly have on the mechanical performance of vanadium containing PM base powders.

In this study, two base powders with pre-alloyed vanadium were sintered in a variety of atmospheres containing various levels of nitrogen. The effect of the nitrogen content in the sintering atmosphere on the mechanical performance was evaluated. Through metallographic evaluation, the microstructures of the vanadium materials were found to contain finer grain size and decreased spacing on the pearlite lamellae, which in turn increased the strength and hardness properties compared to materials manufactured from a plain iron powder.

The base powders were mixed with lubricant (Intralube® E, Höganäs) and natural flake graphite (PG-25, Imerys) in order to make the material systems F-0000 and F-0008 in accordance with MPIF Std. 35 [4]. The mix compositions are shown in Table 2.

From each mix, tensile and impact specimens were compacted to a green density of 6.8 g/cm3 [10]. The bars were sintered in a 150 mm (6”) mesh belt furnace at a temperature of 1,120 °C (2,050 °F). The nitrogen level in the atmosphere was varied from a high of 95 percent nitrogen to no nitrogen. The atmospheres analyzed are shown in Table 3.

After sintering, the specimens were tested for tensile and impact properties in accordance with ASTM E8 and ASTM E23 respectively [11-12]. Apparent hardness and micro-indentation hardness were evaluated in accordance with MPIF standards [10]. The carbon, nitrogen, and oxygen contents of the specimens were determined using combustion techniques according to ASTM E1019 [13]. Microstructure evaluation was completed using light optical microscopy. In order to quantify the effect of vanadium and nitrogen content on the sintering atmosphere, the average grain size of the ferrite was determined using the planimetric method outlined in ASTM E112 [14]. Pearlite colony size and lamellar spacing analysis was conducted use SEM measurements.

The tensile values for the F-0000 materials are shown in Figure 1.

Small differences were observed between the mix compositions with the vanadium alloyed steels having consistently higher tensile properties compared to the pure iron powder. Once the nitrogen was present in the atmosphere, there was little change in performance as the amount increased.

When no nitrogen was present, the values of the vanadium alloyed steels was lower compared to when 25 percent nitrogen was present in the sintering atmosphere. Similar trends were observed for the materials containing carbon. The F-0008 tensile results are shown in Figure 2.

At the lower level of vanadium, only a small difference in ultimate strength was observed compared to the pure iron powder. However, there was a significant increase in the yield strength. The material with the higher vanadium level was significantly stronger than the other materials.

The impact of the vanadium alloying is clearly shown in the increase in tensile and a decrease in impact properties. Vanadium is known to combine with nitrogen and carbon to form V(C,N).

This formation leads to an increase in the mechanical properties through strengthening and refinement of the microstructure. In this study, the vanadium alloyed materials had increased strength properties without the addition of nitrogen. However, further improvement was observed when nitrogen was introduced into the sintering atmosphere for both the F-0000 and F-0008 materials. Increasing levels of nitrogen did not translate into increases in properties. To understand the amount of nitrogen absorption, the nitrogen content at each sintering condition was evaluated. The results are presented in Table 4.

While the tensile and impact properties were very similar once nitrogen was introduced into the sintering atmosphere, the chemistry data indicates that additional nitrogen was absorbed by the vanadium containing materials. The materials with the high level of vanadium alloying absorbed, on average, almost double the amount of nitrogen. It should be noted the vanadium level in this base powder was double of the lower vanadium containing material. The F-0008 based materials were also evaluated for vanadium content. The data are presented in Table 5.

Again, a similar trend was observed. The vanadium-containing materials continued to absorb more nitrogen from the atmosphere as the nitrogen level was increased. The amount of nitrogen absorbed was also elevated slightly compared to when no carbon was present in the material. The effect of the vanadium and nitrogen alloying is identifiable in the microstructure. The microstructures of the F-0000 materials are shown in Figure 5.

While both materials were ferritic, the size of the ferrite is noticeably smaller in the F-0000V2 material. This decrease in grain size results in improved strength values. Grain-size measurements were completed to quantify the decrease in average grain size between the materials. The grain size measurements are shown in Figure 6. A decrease of between 5 to 10 µm was observed for the vanadium containing materials compared to the standard pure iron material. Only very minor differences were observed when the nitrogen content in the sintering atmosphere was varied.

The ferrite size in the F-0008 material systems was also noticeably smaller for the vanadium containing materials. Photo micrographs of the F-0008 and F-0008V2 material are shown in Figure 7.

There was a measured decrease in the lamellae spacing when vanadium was introduced into the powder. At the higher vanadium alloying level, the spacing of the lamellae was about one half of the spacing found in the pure base iron powder. It is well established that decreasing the spacing of the pearlite lamellae results in an increase in the tensile properties of a material. The ferrite present was also noticeably smaller compared to the standard F-0008 material. Measurement of the pearlite colony size was also conducted using SEM and point count techniques for selection of the colonies. The measured pearlite colony size is shown in Figure 9.

As observed through light microscopy, the pearlite colony size decreased noticeably with the addition of vanadium. The higher vanadium content in the F-0008V2 material also resulted in further decrease compared to the lower level found in F-0008V1.

Based on this study, the following conclusions can be drawn:

2. The addition of nitrogen in the sintering atmosphere, whether carbon was present or not, increased the mechanical properties compared to sintering in 100 percent hydrogen. However, increasing the amount of nitrogen did not have an appreciable effect on the strength and impact properties. The only property that showed an increase with increasing nitrogen levels in the sintering atmosphere was the apparent hardness.

3. Evaluation of the microstructure found the vanadium materials exhibited a smaller grain size. Measurement of the ferrite grain size found decreased average grain size when vanadium was present. Increasing the amount of vanadium in the powder resulted in a finer grain structure. The addition of nitrogen to the sintering atmosphere had little effect on the average grain size in the absence of carbon.

4. In the F-0008 materials, a decrease in the pearlite lamellae spacing was found for the vanadium alloyed materials. The use of vanadium decreased the lamellae spacing by almost 50 percent. In this case, increasing amounts of nitrogen in the sintering atmosphere resulted in a slight decrease in spacing. A decrease of up to 50 percent in the average pearlite colony size was also observed with the vanadium alloyed materials. Increasing nitrogen content resulted in further reduction of the average pearlite colony size. 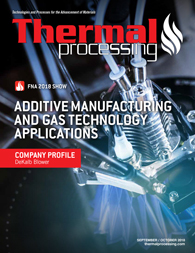