Decades ago, early in my heat-treating and metallurgical career, there used to be a saying that heat-treating — the institution — couldn’t decide whether it was an art or a science. This philosophy was likely due to the fact that personal computers, programmable logic controllers (PLC), and cellular phones were decades away and the term ‘digital’ related to something to do with counting one’s fingers. And the knowledge base, “the hands-on art of the process,” resided in the minds of experienced men and women who grew up in the industry.

From the perspective of those skilled in the art, the science of heat-treating has made enormous strides in moving the process into the 21st century. Still, even for most people inside the manufacturing arena, heat-treating is a mysterious process where the terms ‘tempering’ and ‘scorch and warp’ are all that come to mind when they hear the term heat-treating.

It’s true that when an outside-the-industry observer compares a photo of a typical batch and pusher furnace from 1945 to today’s systems they’d say, “OK, I give up. What’s the difference?” Why? Because the casual observer would see two sets of three rectangular steel boxes connected together with a lower box sitting in a hole, Figure 1. And looking closer at Figure 2, they’d see the pusher furnace with a refractory lining, work support, and alloy radiant tubes. In the second connected box called the ‘vestibule,’ they’d see an elevator and below they’d see a quench tank in the hole or pit in the ground. The second furnace system would still have three boxes (Figure 3), one still in a hole, but the one with the refractory lining is very short — almost the same size as the other two boxes. But that’s where the similarity ends.

Heat-treating, specifically endothermic carburizing, can be performed continuously in pusher furnaces, the long box, where trays of parts are pushed against one another through the furnace, processing many trays through successive zones until all of the required parts in the inlet queue have been processed. Batch furnaces, the short box, process one tray at a time. In both furnaces, parts are heated in an endothermic atmosphere consisting of 20 percent CO, carbon monoxide; 40 percent H2, hydrogen; and 40 percent N2, nitrogen; with small amounts of CO2, carbon dioxide; H2O, water vapor; and CH4, methane. After the atmosphere’s carbon potential (CP) has added a specified depth of carbon to the steel parts, each tray is individually, even in the pusher furnace, quenched in oil to harden the parts. Tempering to improve toughness then follows.

Why do the pusher and batch furnaces outwardly look similar when they’re 73 years removed? Because both must have refractory insulation, like the kind that lines the typical refractory fireplace to reduce heat losses and protect the home’s construction.  Carburizing takes place at 1,700°F (927°C) and higher so the insulation exists to eliminate heat losses and protect the furnace’s steel construction. It’s the same reason your home has fiberglass insulation in the walls and ceiling — to conserve energy.

Having said that, one might ask: With insulation like that used on the space shuttle, isn’t there a better material than that used in fireplaces? The answer is, of course, yes. There is. We don’t use it because manufactures wouldn’t pay the price we’d have to charge for the furnace if we used it. Let’s say a typical 36” x 48” x 36” oil quench batch furnace would sell for about $400,000 with the normal insulating fire brick. If we used state-of-the-art insulation that was not as expensive as the space shuttle but with similar efficiency, that furnace would probably cost at least three times more.

No one has come up with a better or less expensive insulation system that manufacturers could afford and still make an acceptable margin on their product.

Carburizing furnaces, those that operate at atmospheric pressure and use endothermic gas, have their casing structure made from 3/16” mild steel plate with structural steel members such as I-beams and channels to add rigidity. Insulation usually consists of nine-inch-thick insulating fire brick on the hot face backed by four-and-one-half-inch thick low temperature insulating fiber board. Harder brick made from alumina, aluminum oxide, is used to support the tray-on-tray system in pusher furnaces. Batch furnaces, for the most part, employ heat-resisting stainless-steel alloys containing nickel, chromium, iron, cobalt, tungsten, and other critical metals to enhance the performance of today’s furnaces.

Years ago, endothermic gas for atmosphere carburizing was produced in generators containing a heat-resisting iron, nickel, and chromium retort, a vertical 10” diameter pipe filled with nickel nitrite catalyst that creates endo gas from the reaction of air, and natural gas at 1,950°F (1,065°C). It’s difficult to change the catalyst in the retort — maintenance personnel had to pull the retort up through the top of the generator with an overhead crane, requiring even more head room. Those days are over now that we can just open the door to the generator shown in Figure 4, disconnect the retort from the cooler, and simply pull it out with a walk-behind fork loader or forklift.

Although the technology exists to reduce heat loss and accommodate manufacturing’s material handling requirement and the proven assembly construction methods still in use today, there’s just no more economical solution to make the furnace box at present than that presented above.

However, because of the worldwide demand to improve quality and implement continuous improvement, the human machine interface has definitely evolved. Figure 5 is a visual description of the evolution of furnace process control for carburizing steel and other critical heat-treating processes. Early carburizing process control required very experienced human intervention to make decisions on controlling the CP. In the past, monitoring equipment was often crude, requiring constant calibration to maintain accuracy. Temperature, carbon potential, and their association with a material could not be integrated since communication between instruments and sensors did not exist.

Step-by-step, as technology improved in other industries, some of those developments found their way into heat-treating. Case in point: the microprocessor, computer, and the programmable logic controller (PLC). The injection molding industry was one of the first to embrace the PLC as a device to drastically increase production and reliability of hardwired relay logic. Relays are mechanical switches that, when energized by single-phase 120 vac, would power items such as motors, solenoid valves, and other electrically operated devices. Although they operated fairly quickly, being mechanical they are prone to failure. PLCs operate in the software realm on what’s called firmware. Firmware is basically software that’s permanently programmed into plug-in chips. Software as we know it is what makes computers, cell phones, and the internet work. PLCs also accept special software that creates the same functions as hardwired relays but are orders of magnitude faster and more reliable.

Finally, industrial hardened computers have morphed into the human machine interface (HMI) and talking to the PLC via the touchscreen HMI to control temperature, CP, and all motions such as doors, elevators, valves, etc. Specialized communication protocols allow recipes to be stored in main or host computers anywhere and distributed anywhere to any heat-treat facility. Equipment can be interrogated via the internet to diagnose alarms and download new software just as is done with the mobile phones.

Understanding the effect of boron in steels 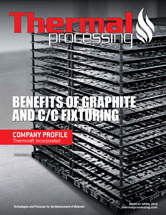 Anatomy of a Heat-Treating System

Heat treating is not for the faint of heart

Use of molten salt in heat treatment