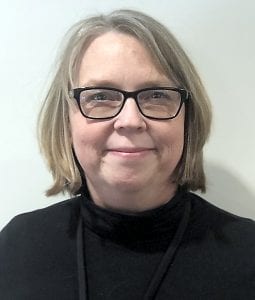 The use of hardness testing as a quality control method to check the outcome of a thermal treatment process is a common application of this measurement technique. The process wherein heat-treatment practitioners measure hardness by one method and convert the results to a different scale is generally known and a common practice. However, hardness data conversions from one scale to another may not always yield the expected results. The variation in conversion results from different hardness scales can make the difference between accepting and rejecting a production batch of components.

This discussion delves into the practical implications of hardness conversion. In this article, we explore the impact of converting from micro- to macro-indentation hardness methods — i.e., Vickers (HV) and Knoop (HK) to Rockwell C (HRC) — in case-hardened steels.

Methods of measuring hardness have been documented and in use for more than two centuries [1,2]. There are many hardness test methods that are performed by an array of techniques, from comparative references to scratch testing and indentation methods [1,3]. While hardness numbers have repeatable correlation to material strength, efforts to reduce hardness testing to a universal, fundamental physical test have not been successful. Furthermore, conversion between different methods is not mathematically exact [3,4].

Numerical hardness values are unique to each hardness scale and method. For an indentation hardness method, the reported hardness numbers are based on the load on the indenter, the geometry of the indenter tip, and the measurements of the permanent plastically deformed impression in the sample. Hardness numbers may be calculated as a function of either a projected area or as the contact surface area of the indentation depending on the scale used. Conversion of hardness numbers from one scale to another is generally accomplished by reviewing the tables and equations available in externally published standards, such as ASTM E140 or ISO 18265 [1,3]. However, the guidance in the ASTM E140 standard regarding conversion from one scale to another, states the following:

“Conversion of hardness values should be used only when it is impossible to test the material under the conditions specified, and when conversion is made it should be done with discretion and under controlled conditions.” [1].

Furthermore, ASTM E384 confirms that there is no generally accepted method for precise conversion to other hardness scales [7]. While the conversion from one scale to another is straightforward, the converted hardness values need to be considered in the context of expected results from the thermal treatment process. The hardness conversion tables and equations in the standards generally correlate empirically derived numerical scales for specific materials and are not direct conversions of physical property relationships.

Micro-indentation hardness methods such as HV and HK are essential for certain situations because of the need to take multiple measurements within a small volume of material. In a surface-hardened steel, whether carburized or nitrided, the hardness gradient from the surface to the core must be evaluated. Assessment of this region requires a collection of discrete hardness values from small volumes of material [8]. The micro-hardness methods evaluate only the region of interest without being rendered inconclusive by overlapping with other adjacent areas within the microstructure. Hardness number conversions are also subject to variation in sensitivity at different hardness levels. Figure 1 illustrates typical cross-sectional views of surface-hardened steels with micro-hardness indentations. As the hardness decreases, the indentation size increases.

To illustrate the potential discrepancies created by hardness conversion, two case-hardened steels were examined and hardness numbers were converted from Vickers (HV) and Knoop (HK) to Rockwell C (HRC). In Figure 2, the hardness gradients for two case-carburized steel ring samples are shown as converted HRC values as a function of depth from the surface. Figures 2a and 2c show HRC versus depth for the gradient until it begins to transition to the core hardness, and Figures 2b and 2d are zoomed-in regions from the same data sets to illustrate the potential for reporting different case depths depending on which original measurement method was used. The hardness test equipment used for the study was calibrated and used routinely for production and development assessments as a referee location. 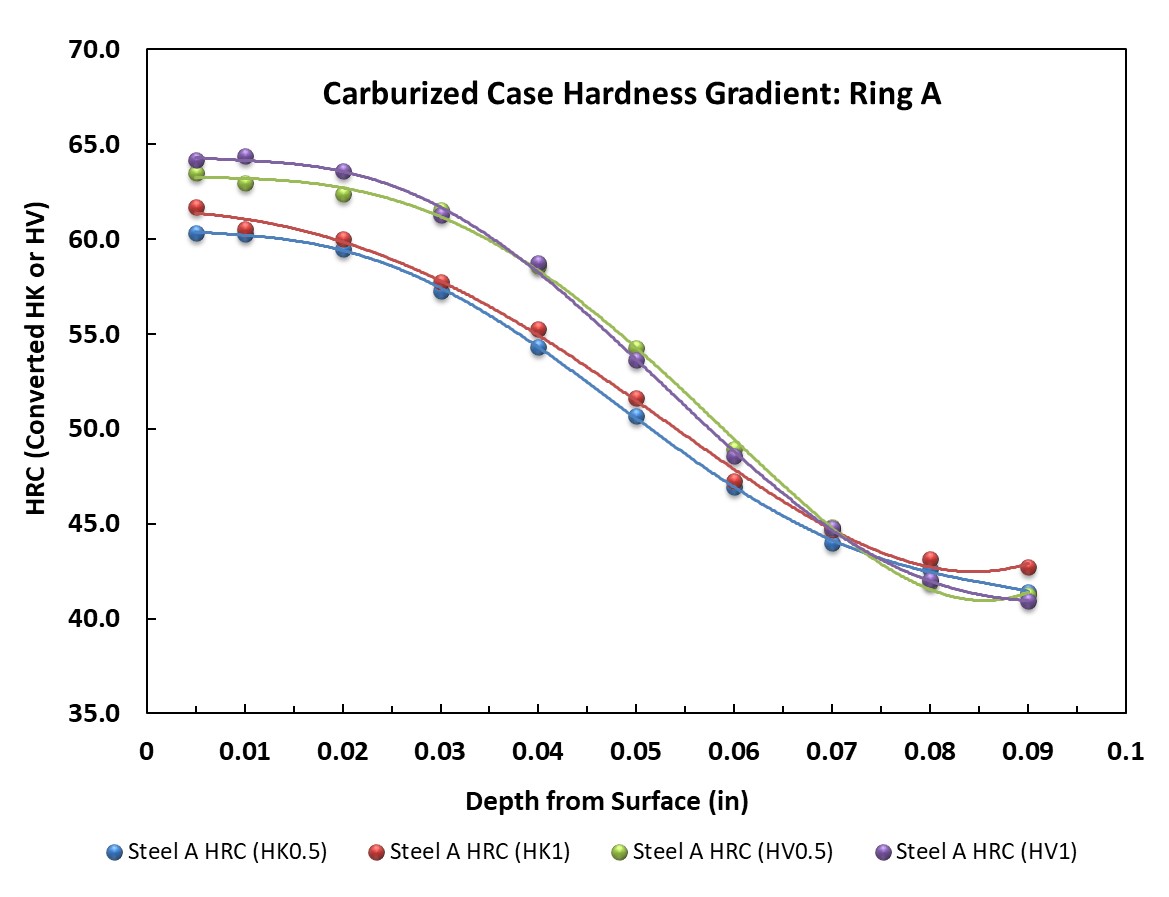 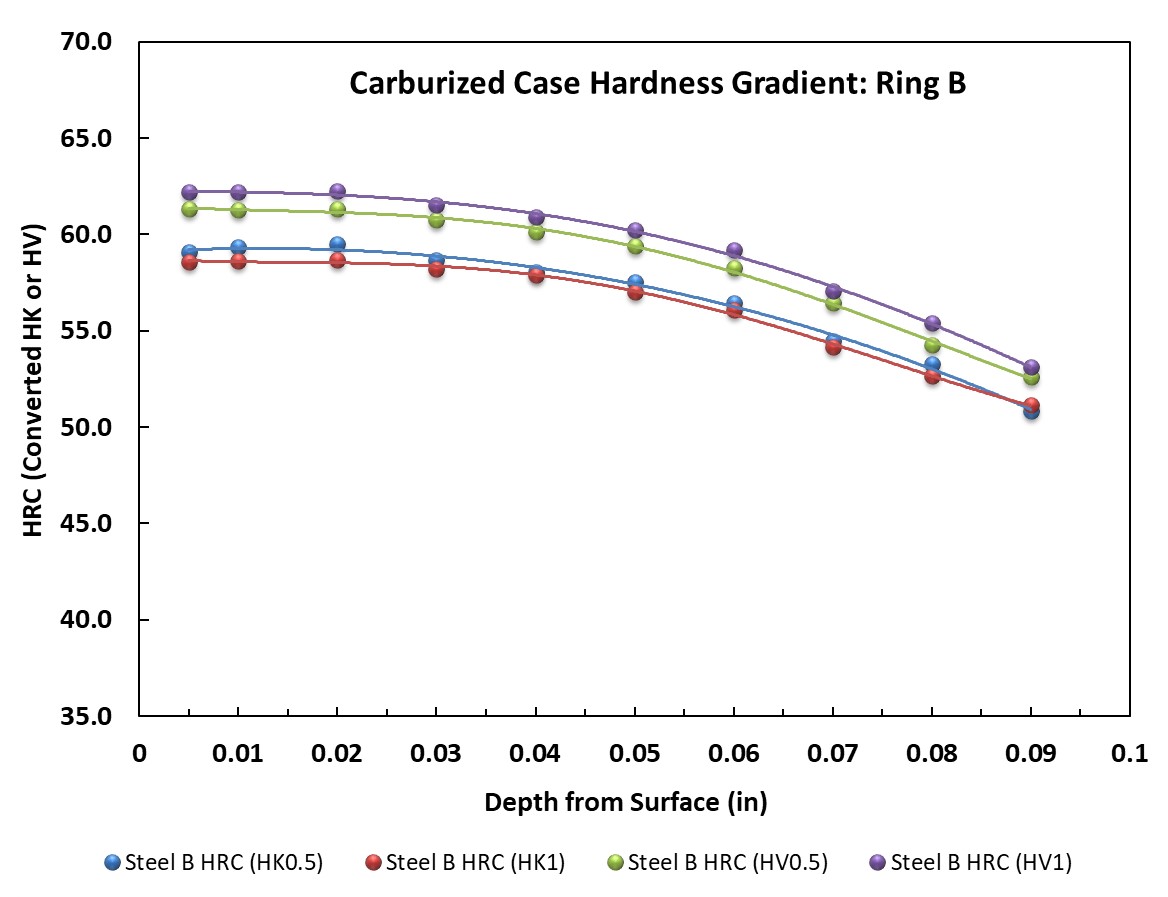 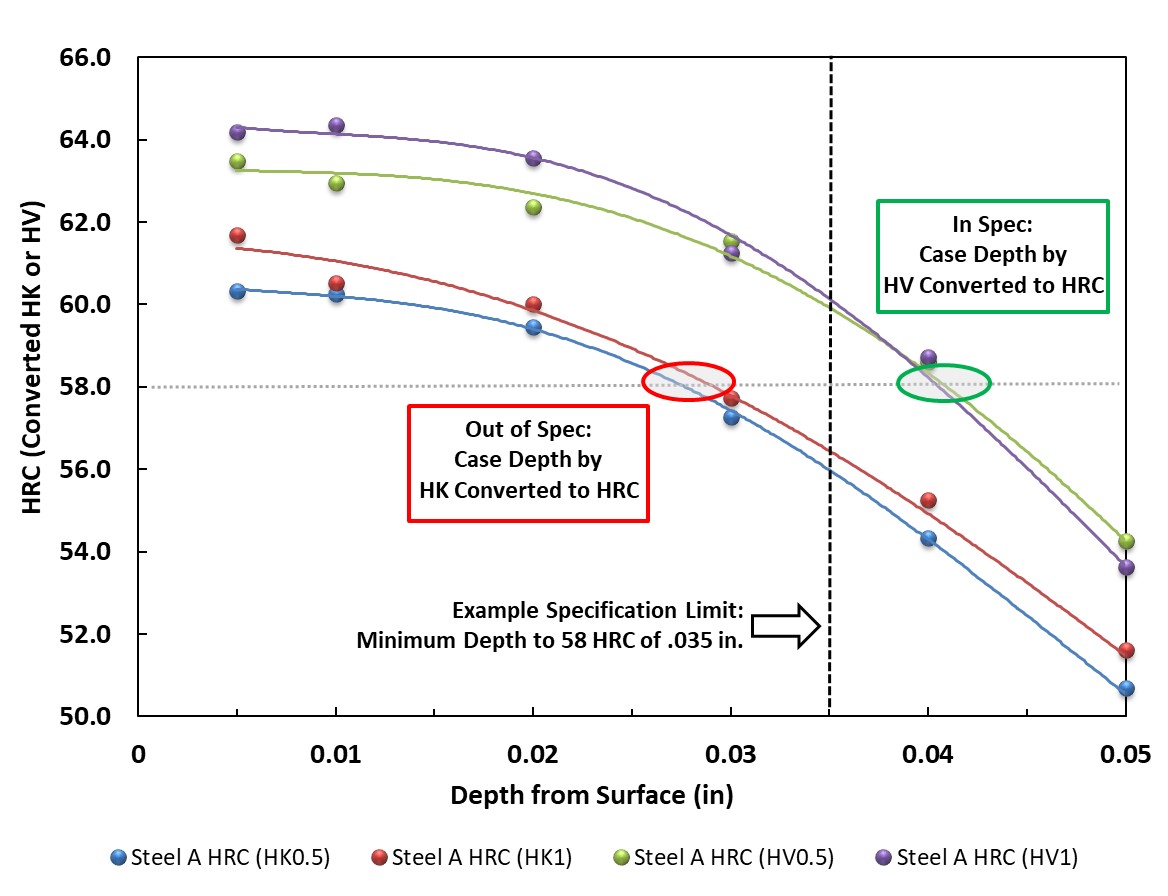 For the two steels, the hardness was measured both by HK and HV micro-indentation methods on the same samples from cut, mounted, and polished cross-sections of rings that had been carburized, hardened, quenched, and tempered to production heat treating specifications. The hardness data were also collected at two different HV and HK loads (500g and 1000g). All measurements were repeated twice for a total of three data points per reported average converted HRC value. Data were initially recorded as output from the software in the automated micro-indentation system, followed by verification using the conversion guideline equations in ASTM E140 and visual assessment of the indentations.

In the next section, the implications of these variations are discussed. Both HK and HV conversions at the two test loads, 500g and 1000g, yielded consistent results within a particular method; therefore, discussions will be limited to one scale versus another.

Engineered products such as bearings or gears may undergo diffusional thermal treatments (including carburizing or nitriding) to harden just the near-surface region of the material. These products require validation that the depth of the surface hardening is adequate to meet the product design intent. These types of products are highly reliable and, in some markets, safety is also a critical requirement. When these products are surface-hardened, it is still a common practice to state the hardness requirements in terms of the Rockwell C hardness scale (HRC) on drawings or in specifications, in particular in the United States [3]. However, it is necessary to use micro-hardness techniques such as HK and HV for direct measurement. The hardness test method selection is constrained by the thickness of the hardened zone as well as the part geometry.

In Figures 2a and 2c it can be seen that for both the alloy steel and the tool steel, over a range of depths and hardnesses, the HK to HRC conversion yields different results than the HV to HRC conversion. Even though the thermal treatment processes, incoming material, and measurement system equipment may all be controlled, calibrated, and identical, the HRC hardness values converted from HK are lower than those converted from HV measurements. Overlap between the two methods occurs below approximately 45 HRC. This difference is large enough that on a practical front, simply making the conversion from one hardness scale to another to communicate results could determine whether the product is accepted or rejected. The differences in results from converted hardness numbers may also be greater from scale to scale than the accepted or known variation within any single hardness scale.

Examining the results over a narrower range of hardness and depths — as in Figures 2b and 2d, which are magnified views from the same samples that produced Figures 2a and 2c — puts the results in the context of specification limits. For both steels, as this example shows, the HRC results converted from HV would be accepted and the HRC results converted from HK might be rejected. While these limits were chosen for demonstrative purposes, they are consistent with actual requirements for these types of steels. At the 58 HRC level in Figure 2b, the difference in reported case depth for the HK conversion is approximately 0.015″ lower than the HV conversion value. In Figure 2d, for steel B, the HK converted value is 0.025″ less than the depth based on the HV conversion.

In a production setting when the difference between the conversions becomes evident, one initial response may be to assume there is a problem with the measurement itself, with the conversion calculation, or even with the treatment process. However, Figure 2 clearly demonstrates the inherent difference between the empirically derived conversions in ASTM E140 from HK and HV to HRC over this hardness range — further supporting the blunt guidance in the ASTM E140 standard to convert “only if impossible” to measure directly [5]. Therefore, practical solutions are needed in order to have the appropriate standard work in place.

When such differences do arise, or as practitioners establish by experience that the results for hardness conversions are not consistent from one scale to another, options for addressing them include:*

1. Accept/reject the product based on the converted values for the scale used.

3. Change the specification requirements to reflect the most practical or preferred test scale in order to avoid conversion.

*Note: All these discussions presume that the hardness test equipment is calibrated correctly and the thermal process is under control, has appropriate monitoring, and was initially validated as acceptable.

The selection of an option warrants discussion among practitioners, since there are pros and cons to each choice.

The first option benefits from a robust set of standard work, a consistent method, and preferably the use of only a single micro-hardness test method to avoid the anomalies that can arise if a choice of method is permitted. But this option — making a decision based solely on the converted results as presented — may mean the rejection of a good product as well as acceptance of a borderline product. While a practical specification typically has a range of hardnesses to define a “case depth,” clearly the large differences between the converted results from the HK and HV scales in Figure 2 for each material will occasionally cause discrepancies. In that case, depending on the tolerance for risk and the application of the part, the decision to accept product based on as-is results may vary.

The second option — developing local conversion tables and correlation equations — takes into account the specific thermal processes, materials, and acceptable outcomes, and formalizes them to establish more uniform decision-making. Legacy experience may identify that the conversions sometimes produce different results, but by documenting the expectations using standardized samples and a robust data set, the variation inherent in the standard conversion curves is reduced. Additional consideration for documentation of expected outcomes may be warranted in the case where automated micro-indentation is used, since there may be conversions built into such systems. As with any measurement or data conversion for production, agreement among customers and suppliers should be part of this method’s finalization.

Finally, the third option — starting with a micro-hardness requirement rather than HRC, and/or changing the existing specifications — is the most permanent solution. This approach requires starting with or converting to a specification that calls out an appropriate hardness method, such as a particular micro-hardness scale. While this is a permanent solution, the initial selection of the hardness scale and limits of the specification often rests upon decades of legacy experience, design practice, design systems, and successful product performance in the field, rather than an intentional selection of the best method to interrogate the surface hardening process.

Although the permanent fix is to change the requirements in a specification for measuring the surface hardening to a measurable scale, this is only possible with agreement among all parties, and may be unrealistic in some cases due to long-standing legacy requirements, specifications, and design systems based solely on Rockwell hardness. A solution for overcoming that is simply to be consistent within standard work, operating procedures, and data, so that the local conversion becomes a viable option.

Perhaps the most important consideration to remember is that the hardness conversions in external standards are guidelines. Conversion from one hardness scale to another introduces a bias that may be significant in some circumstances. This prevents ready interchangeability between test scales when working to a common requirement. Conversion tables should be considered a starting point, but likely will need additional boundaries and understanding to ensure that the converted result interpretation provides an adequate basis for decision making and quality control.