The evolution of pyrometry has gone from the single-color to the two-color to the multi-color pyrometer; recognizing that pyrometry can only measure solid and liquid targets, each developmental step has solved problems that were insoluble before.

Radiation thermometry, also known as infrared pyrometry, optical pyrometry, or simply pyrometry, is a non-contact temperature measurement technique that requires measurement of some portion of the thermal radiation given off by a hot object. The pyrometer, the measuring instrument, must look through some environment at the radiating target. There are several different types of pyrometer available; some make severe demands upon the operator, and some are less demanding. To make the proper pyrometer choice, the environment and target must be considered. Does the environment affect the radiation in some way, and if so, what correction is required? Does the target have the characteristics of an ideal radiator, and if not, what correction is required? These issues make non-contact temperature measurement difficult, but the rewards for success are substantial. For processing industries, the capability for fast, accurate, non-contact temperature measurement enables automatic process control, improves quality and productivity, and reduces energy usage. Fortunately, pyrometry has come a long way in a relatively short period and much of the uncertainty can be dispelled.

The vast majority of pyrometers are based on some aspect of Planck’s Law, which says that the radiated spectrum of light from a hot object is governed only by its temperature. At the end of the 19th century, Max Planck was considering the problem of blackbody radiation, also known as cavity radiation. At the time, there was no theory that could describe the data from this source. In fact, physicists considered this problem to be one of the two cases left unsolved in their discipline. (They were a bit optimistic.) It was called the “Ultraviolet Catastrophe” because the equations that fit the data for longer wavelengths predicted infinite radiation at the shorter ultraviolet wavelengths. In reality, however, the radiation in these wavelengths decreased to zero, so a very substantial difference existed between theory and reality. Planck solved this conflict by a mathematical substitution: He replaced an integral with a series. This may sound esoteric, but the result was stunning. It implied the quantization of energy (lasers, tunneling diodes, nuclear bombs, etc.). Planck knew this (the quantization part, not the bomb part), and suppressed the data for a time since he didn’t want to deal with the inevitable blowback.

For pyrometer users, one of the implications of Planck’s mathematical substitution is the fact that pyrometry only works on solids and liquids. The continuum radiation of a thermal target only occurs when the radiating electrons are close together, as in solids and liquids. Solids or liquids suspended in a gas can be acceptable sources of thermal radiation, but the gas itself cannot.

A further implication is that no individual photon carries the temperature information, but that the information is contained in the wavelength distribution of light in the thermal spectrum. So, anything that changes that distribution along the way leads to error in the measurement.

In the ideal case, the radiated light from the thermal target depends only on the temperature. In reality, the emissivity (also known as the emittance) of the target material modifies the radiated spectrum as a multiplier of the mathematical statement of Planck’s Law. The emissivity is nothing more than the efficiency of the radiator at each wavelength radiated. Emissivity ranges from zero to one; obviously, its effect can be very large.

To further confound the issue, emissivity is not a property of matter, but a property of the particular sample in question. Key parameters affecting the emissivity of a sample are the surface finish, the chemical composition, the degree of oxidation, the phase, the wavelength at which the emissivity is desired, and the temperature itself. Graphite is one of the more common and better-known refractory materials. Figure 1 shows the reported emissivity of graphite as a function of temperature.

The number associated with each trace describes the conditions for that measurement. Clearly the values reported vary widely, from less than 0.3 to 0.99. Some show a temperature dependence, and some do not. And this is for a material, graphite, that is considered well behaved.

Pyrometers and Their Evolution

The idea of emissivity and the development of pyrometers are intertwined. The first pyrometers, which appeared early in the last century, were merely light meters. They measured a quantity of light and that quantity was related to a temperature. This type of pyrometer is known as a single-color or brightness pyrometer. While the terminology “single-color” implies a single wavelength, all such devices actually use a waveband — some contiguous group of wavelengths. If the manufacturer reports an integral wavelength for the device, this is the effective wavelength, which means the mathematics work for this value. The waveband can be as wide or as narrow as desired. This raises the possibility that two pyrometers of different manufacture, both reported to use the same wavelength, might require a different value of emissivity to correctly report the temperature for the same target. The operator is required to know and enter the emissivity in this type of pyrometer.

It is clear from Figure 1 that this is a daunting task. By the middle of the last century, a solution appeared. The two-color, or ratio, pyrometer was developed. This instrument took advantage of a mathematical manipulation of Planck’s Law. If the intensity of the thermal radiation is measured at two wavelengths (also “colors,” but actually wavebands, just as in the single-color pyrometer), the ratio of these intensities can be solved for temperature, and the expression for emissivity can be canceled out. This worked for graphite and other refractories, but did not work for an important class of materials: metals. For the emissivity to cancel out, it must be the same at both wavelengths; a target with emissivity constant with wavelength is described as semi-ideal, or “gray.” But metals typically show a wavelength dependence of emissivity (i.e. non-gray), as seen in Figure 2 for tungsten. Again, each numbered trace was measured under different conditions. Tungsten is a good example of a non-gray metal because it has been widely studied for its use in lighting applications, but it should be noted that every metal in the referenced volume shows similar spectral dependence of emissivity. For ratio pyrometers, the operator is required to either assume the ratio of the emissivities is one, or enter a “non-grayness” factor, an even more daunting task.

At the end of the last century, a further solution was developed that addressed the non-grayness (spectral variation of emissivity) of metals. Spectropyrometers, or multi-color (multi-wavelength) pyrometers measure very narrow wavebands over large spectral areas. The very large amount of data is then processed to determine the emissivity at the time of the measurement, thus eliminating the uncertainty of unknown emissivity. These instruments have been available now for about 25 years and have resolved some previously intractable issues. Figure 3 shows a nickel superalloy being processed in a vacuum induction furnace for investment casting, contrasting results from a single-color pyrometer and a spectropyrometer [3]. The operator rapidly melted the sample, changed power several times, and then left the melt to cool naturally just after 11:00. The spectropyrometer detected the emissivity changing with melting, freezing, and composition change; the solid phase emissivity before and after melting differed by 10 percent. The brightness pyrometer reports an impossibility, an increase of temperature without power being added. This is because its emissivity had been set by the operators to 0.3, but as the metal freezes, its emissivity actually increases from 0.2 to 0.6.

It has been established that some section of the thermal spectrum must be measured accurately to determine the temperature of the radiating object. The environment can interfere in a number of ways. Material in the optical path can absorb some part of the radiation. Other materials, either in the path or nearby, might emit their own thermal radiation, which may enter the instrument’s optics either directly or by reflection.

One common object in the sight path would be a window or sight glass into the furnace or process chamber. An ideal optical window, one that transmits all wavelengths equally, will block about 7 percent of the incident thermal radiation, simply from reflection from its two surfaces. For a single-color pyrometer, the operator must modify the emissivity setting to account for this; a two-color pyrometer or a spectropyrometer would show no effect. By way of contrast, the transmission of a non-ideal window is shown in Figure 4.

This window will affect all pyrometers in ways that are not immediately obvious. The solution for such windows is either replacement or calibration with the instrument of choice.

Other environmental interference could come from gaseous byproducts of the process or the method of heating. Gases may absorb radiation or emit radiation depending on their temperature. Material thrown up by the process can also absorb or emit. Figure 5 illustrates a rather extreme case, the tapping of a blast furnace. The yellow and red colors above the casting are sodium and potassium in the vapor state, radiating their respective primary wavelengths (lines) because of the high temperature of the process. Sparks of various yellow-gold colors can be seen throughout. The gas interference would affect a single-color pyrometer in a random fashion, as gas concentration is not constant. Two-color pyrometers would be affected if the Na and K lines are within either of their wavebands. A spectropyrometer would not be affected by these gaseous lines, whether emission or absorption.

The sparks are another matter. The thermal radiation from the unwanted object, whether spark or furnace furniture or furnace wall, can enter directly by emission or indirectly through reflection. No instrument can remove thermal radiation of an undesired object from the thermal radiation of the desired object. Once the cream is in the coffee, it can’t be removed. The solutions for this case are to measure only when sparks are not present, measure all the time and reject the data with sparks (spectropyrometers can do this), or design the measurement path to remove the unwanted radiation.

The problems of non-contact temperature measurement are associated with the material measured, the environment of the measurement, and the pyrometers themselves. The material issue is the emissivity, which varies with surface finish, composition, oxidation, phase, wavelength, and the temperature itself. Metals, which are mostly non-gray, can exhibit both gray and non-gray behavior as a result. This incessant variation is observed in many thermal processes, where the whole point of the operation is to change a feedstock to a finished product.

The environmental issue is interference. Thermal radiation from the target is absorbed by windows and gases. Stray thermal radiation from any heated source may enter the optics if a path is present. Reflections from these same heated sources and even the target itself can bounce around in the heating area and enter the optics, corrupting the measurement.

The evolution of pyrometry has gone from the single-color to the two-color to the multi-color pyrometer. Recognizing that pyrometry can only measure solid and liquid targets, each developmental step has solved problems that were insoluble before. The single-color made non-contact temperature measurement possible. The two-color made accurate temperature measurement of gray materials, but returned large errors when confronted with the non-grayness of metals. In the current stage of evolution, the multi-color pyrometer addresses both unknown and changing emissivity and the non-grayness of metals to return accurate temperatures. 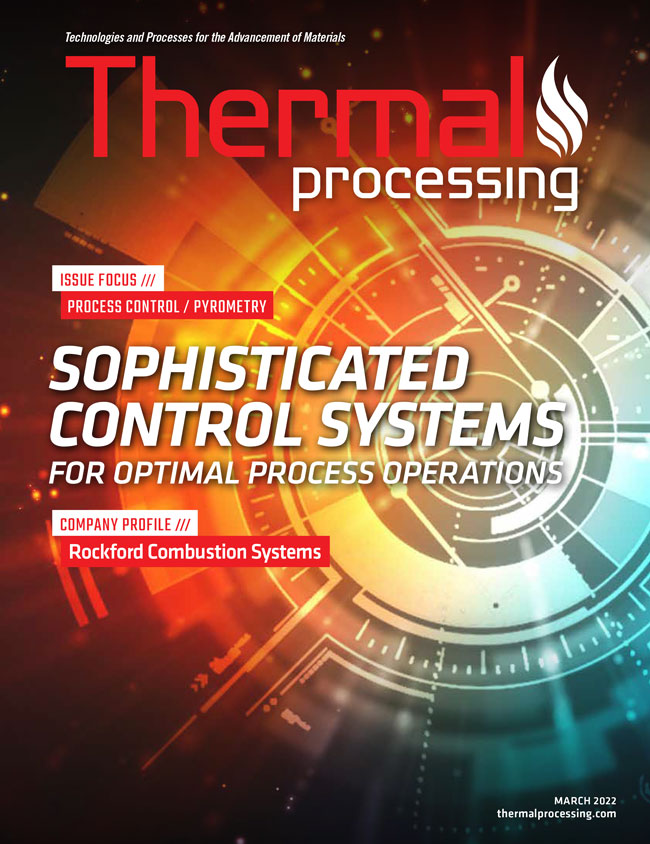