Ambrell Corporation, an inTEST Company, is a global leader in the induction heating market, offering custom induction-heating solutions to a wide range of industries.

Induction heating can be used for a vast array of applications, but what may be surprising is that list continues to constantly grow. If you think your job can’t use induction heating, then you might want to think again —by asking the experts at Ambrell Corporation.

“The success of this business has been our knowledge and our capability of helping our customers find the best solutions for the projects they have, and I can tell you, I’ll attend two or three trade shows every year just to make sure I stay in touch with the customer base out there, and how many times we have customers that tell us, ‘Oh, you can’t heat this with induction,’” said Scott Nolen, president of inTEST’s Process Technologies Division and head of Ambrell. “Next thing you know, we’re selling them equipment because we’ve shown them, not only can we heat it with induction, but we can heat it so much better than the way they are doing it today; it’s really just a game changer for a lot of people.”

Ambrell, which was founded in 1986 but later purchased by inTEST Corporation in 2017, focuses on providing the best and highest technology in an induction heating system, according to Nolen.

“We work with a number of partners that will then purchase our equipment and then build their system around our induction heating equipment to meet their specific heat-treating application needs,” he said.

In the field of heat treating, Nolen said Ambrell doesn’t sell equipment directly to customers, but, instead, it sells to the company’s partners who then sell Ambrell’s technology to end users in the heat-treat market.

“These partners can both be integrators in the United States, various companies that put together heating systems in the United States, or they can be our distributors overseas,” he said. “We have a number of partners overseas that specialize in heat-treatment systems, and they build their value-add distributors and not just straight pass-through distributors. They build the systems that go around the heat-treatment requirements for customers and many other types of applications, too. It doesn’t have to just be heat treatment.”

Ambrell has been able to offer its technology across a wide array of industries, according to Nolen.

“The great thing about Ambrell is we don’t supply to any one particular industry exclusively; we have numerous industries that we sell to, which really creates a business that can ride through some of the lulls in different industries,” he said. “For example, if we just supplied exclusively to the aerospace industry today, we probably wouldn’t be that busy, but we supply to healthcare and semi and automotive and EV (a big segment of automotive today) and oil and gas. We have many, many different applications out there; many, many different industries we participate in. Before I took this role leading Ambrell three years ago, I spent 29 years in the energy industry. It’s very refreshing being in a business that isn’t relying on the price of oil. We do sell quite a bit of equipment to oil and gas, but we have many other options when the price of oil goes very low. There are really very few industries that we do not sell to in the induction heating space.”

That ability to be diverse has certainly been a driving force to making Ambrell the best induction heating solutions provider in the industry, according to Nolen.

“That comes not just from the core equipment that we manufacture — the power units, the work heads, the coil design, and manufacturer — but also in our knowledge of different applications,” he said. “Because we supply to so many different industries, there are just so many different types of applications that go in these industries and the components that need either heating directly or indirectly through use of susceptor or some other means. We specialize in meeting those solutions, and we have a very talented group of engineers based in Europe, in Mexico, and then we have partners that we’ve educated over the years, long-term partners in Asia that have that solution capability, and even in India. We’re also developing some in Africa right now, too. We basically have them on every continent.”

And the technology that drives that company growth has, itself, grown over the decades, according to Nolen, which, in turn, has caused products to become more efficient in both power and size.

“The real technology has been in the improvement and the technology of the heating systems,” he said. “The heating systems have moved from 30 to 40 years ago when they were tube based. They were very bulky, large, heavy components, and now they’re solid state. We actually have one of our original units that we ever supplied that’s 7 kW and about two thirds the size of a refrigerator, and now we can replace that with a unit that’s the size of a Dell computer. The size has dramatically reduced. We just launched a new product this year that takes our unit that goes up to 125 kW, which was the size of a full refrigerator, and basically shrinks that down to 40 percent of that.”

Those unit advancements in size and footprint and capability are extremely critical to Ambrell’s partners who may need to bundle the company’s units inside a bigger system, according to Nolen.

“We require less of a footprint when they build their system around it, and that makes it much more compact and, in many ways, cost effective both from a manufacturing and transportation standpoint,” he said.

Nolen clarified that, although Ambrell’s heat-treating experience deals mainly with its partners, the company does sell direct to customers every day.

“For heat treating, we mostly do that through partners because of the complexity of heat treatment; every heat-treatment application is relatively complicated; there are a lot of other components that go with it — the water-quench system, the measuring system, the handling system, all of that is done by our partners,” he said. “One of my personal mandates to the business is we will not compete against our customers, and many of our customers are those integrators that put together these overall systems, and we do not want to go and compete directly with them. We want to sell what we do best to them and let them do that part.”

Ambrell is capable of getting the best equipment to its partners by incorporating the company’s experts, according to Nolen.

“That’s the beauty of our labs,” he said. “We have these labs that are based here in Rochester, Europe, Mexico, and Asia, where our clients can bring components. We can show how we can heat it with our lab with our equipment. We can put together a coil that will match the heating needs of their component, and we can actually prove it out in THE LAB, both with the customer in the house, or they can do it virtually.”

That virtual component became a necessity during the COVID pandemic, according to Nolen.

“During the pandemic, that was very important because people couldn’t travel,” he said. “They would send us their components. We’d get on a Teams call with them and show them how we heat it in the lab. Really, it’s twofold: One, it shows them how the equipment will work, and, two, it also uses the knowledge that we have of being able to design heating systems for different applications. They get to take advantage of that knowledge when they partner with us, because we’ve seen a lot of these applications before with different customers and with different users, and we can bring that information to them.”

One of the bonuses of using induction heating is its environmental fringe benefits, according to Nolen. By bringing clients into its facility, Ambrell can show them how induction heating can increase production speed, production accuracy, and — in almost all cases — that production doesn’t produce carbon dioxide nor a lot of waste heat.

“Especially now, one of the biggest initiatives I’ve launched in the last 14 to 18 months is making sure people understand — and it always has been, but we really haven’t stressed it before — induction systems are as green as your grid,” he said. “If you’re on a grid like we are here in western New York state, where 90 percent of our power is not producing CO2, our induction heating systems that are running in this area are very, very low CO2 producing. Whereas if you had big gas ovens, you just don’t get that type of benefit for the CO2 greenhouse gas reduction. And even better, our systems can have anywhere from 75 percent to 90 percent overall efficiency going into the heating of that part, because we’re not heating anything else. Whereas with gas ovens, you’re only going to be a really amazingly good gas oven at 30 percent to 35 percent efficiency. It’s just a really great story to be able to tell people as an energy guy that came out of the oil and gas sector, that I really have a nice green story to talk about now.”

Myriad of successes and solutions

And in a world where companies are pushing to reduce their carbon footprint, Ambrell’s ability to help solve those challenges only serves as a bonus to the company’s overall portfolio, according to Nolen.

“Our successes are just from everything from the small mom-and-pop shop that just needs to heat and do a brazing on a component where they’re doing 2,000 or 3,000 parts a month to a semiconductor company that’s doing epitaxy on wafer or growing silicon carbide crystals, and we’ve shown how we can do that successfully with their technology,” he said.

And as Ambrell moves into the future, Nolen said he expects the company to continue to expand its solutions, as well as its knowledge base.

“We’ll continue to shrink our products; we’ll continue to keep them as small and as cutting edge as possible so people can build efficient systems around them,” he said. “I see us going into different frequencies — lower frequencies, higher frequencies — depending on what the needs are. But even probably more importantly, we will continue to build out our partner network of people that need induction heating systems and are looking for a good partner while they design, while they do the work of how they handle it, how they quench it, how they test it, and all the other pieces that go along with the hardening process. Then, they can just leave the overall heating knowledge to us because that’s what we do best.” 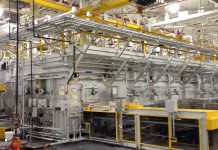 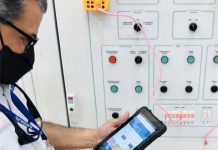 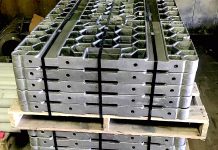 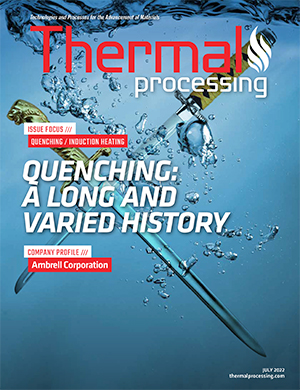