With more than 30 services ranging from austempering and martempering to vacuum heat treat and cold straightening services, Rex Heat Treat serves a range of industries from aerospace and automotive to construction and defense.

Rex Heat Treat has been involved in projects that have plumbed the depths of the Gulf and explored the landscapes of Mars, and yet, the company is still considered one of the best-kept secrets of the heat-treating industry.

However, a quick look at what Rex Heat Treat offers reveals the wide range of the company’s heat treat services, especially for the aerospace, defense, energy, and nuclear industries, as well as many other commercial involvements.

“We just thermally process the metals,” said Johnathan Rex, general manager of Rex Heat Treat. “And that involves anything from solution annealing of titanium or aluminum on up to carburizing or clean hardening or vacuum processing. We pretty much run the gamut. It’s almost easier to say what we don’t do. We don’t do plasma nitriding or traditional nitriding. We don’t do induction hardening or flame hardening. Besides that, we pretty much do it all.”

And Rex is quick to point out that it’s part of that extensive service menu that keeps Rex Heat Treat fulfilling a myriad of jobs.

“I fell in love with this industry because there are so many different materials, and then there are so many configurations of the parts within those materials. You can have a 4340 part or 300M part and have different configurations, and it changes the entire game,” he said. “It’s a part-by-part basis, and it’s always changing. There are always complexities to that.”

This philosophy allows Rex Heat Treat to focus on the particular requirements of a job, according to Rex.

“We focus on unique needs while leaving high production to others,” he said. “And, that’s a really important point. We don’t have belt furnaces; we’re not trying to get into the automotive industry.”

What has especially made Rex Heat Treat a major player in the heat-treat arena is its focus on vertical processing, according to Rex.

“We currently have two vertical gantries here in Lansdale,” he said. “One is a 20-foot gantry, with the other being a 15-foot gantry, and we’ve been running  these furnaces since my grandfather installed them back in the ’50s. And so, for over a half century, we’ve been honing our skills on suspending parts and allowing gravity to help support our efforts. That skill has led us into going with a vertical vacuum oil quenching furnace, which is a nice, easy, clean extension, except that the technology is far greater than an element-lined vertical gantry furnace.”

With the addition of a vacuum system, there’s no carbon depletion in the process, according to Rex.

“There’s no need to burn shims,” he said. “If we’re doing clean, neutral hardening of aerospace components that are near-finished machined, the tolerance for allowable decarb is very low. So, with the vacuum process, as long as you’re conforming with what’s required by the AMS specs, we have no decarb.”

What has driven Rex Heat Treat in its developments is a desire to think outside the box and anticipate what the industry needs in order to move it forward.

“I think this new vertical vacuum furnace is a really good example of that,” Rex said. “We built this furnace without any commitments from any customers. We just knew that there was a gap in the industry, and we knew that we were able to design it and have a piece of equipment that could suspend parts that were 14-and-a-half feet long and vacuum oil quench them or gas quench them. And, we also knew, with the kind of aerospace work that we do, that it’s pretty inefficient at times. You’re sitting there; you’re conditioning a furnace for eight hours, then you’re taking two hours to verify the carbon potential, maybe doing that again if you’re not good. Whereas, with the vacuum furnace, you just simply turn it on, and you’re running. It has really helped us to streamline our processes and make it a bit more efficient for us. And now, we’re not consuming the energy, the gases, or the labor to verify the carbon potential.”

Even for aerospace, the sheer variety of jobs can be vast, according to Rex.

“We support the mills who are producing metals for the industry; there’s several of those that will ship their material to us — it could be for commercial aerospace; it could be for military aerospace,” he said. “We also do parts. We do a lot of titanium components for a beta solution treat and overage, or just a straight solution treat and age. We may even do some fasteners; one of our top customers makes fastener components; we anneal that material and return it to them. It’s an in-process step that we’re doing; as they draw the material down to a smaller diameter, it hardens; they send it to us; we anneal it, and then they can continue with their processing of reducing that wire size.”

Rex Heat Treat is even involved in heat-treating ordnance and missile components, and Rex emphasized that work is mainly due to the company’s vertical vacuum services.

“These missile cases are thin-walled, and if there’s any kind of decarb on them, then they’re done, and they’re pretty expensive parts,” he said. “We’re able to quickly quench those and keep them in a vacuum environment.”

Just a quick look at some of Rex Heat Treat’s past jobs can drive home the importance of what the company has been offering industries for decades.

The company was involved in the heat treating of a wrench used to help stop the leaking well from the Deep Water Horizon oil spill in 2010, according to Rex.

“When they finally figured out what they were going to do and how they were going to go about doing it, they made us quite a large wrench,” he said. “It was plate steel that was cut-out, and we hardened it. We got that done quickly, as we knew what it was for, and then shipped it down and they used that tool, along with a rover down on the sea floor, to stop that well leak.”

Rex Heat Treat was also responsible for heat-treating the drill bits that freed the 33 miners in the 2010 Capiapo mining accident in Chile.

“One of our customers is the prime that worked on that,” Rex said. “They were sent down to free those miners. They rushed those drill bits through our facility out in Bedford, Pennsylvania, and we’re proud of that.”

And it’s not every company that can boast that they have worked on equipment that’s sitting on another planet, but Rex Heat Treat has heat-treated components that are part of the Mars Exploration Rover mission that began in 2003, according to Rex.

“We’ve done components that are on Mars now, and those parts, as we all know, will always be on Mars,” he said.

But perhaps one of Rex Heat Treat’s proudest moments, according to Rex, is the company’s involvement in equipment used immediately after 9/11.

“I got a call from Boeing, and they had this job coming through to us, and the employee from Boeing told me, ‘This is straight from the President; we need these parts as fast as possible,’” he said. “To this day, I don’t know what those parts were for. A lot of times, in heat treating, you have no idea what the part is, but all I knew was that, in my mind, it was of national security to get this thing through as fast as possible; it was the most important job in our company. It was only a handful of parts, but it didn’t matter. We were told by our country that they needed those parts, so we did that.”

That’s just a small part of why Rex loves what Rex Heat Treat can do for American industry.

“I love supporting our country in this unique way, because most people don’t know about heat treating, but it is a very important piece of our industry and the security of our country,” he said. “Just from that standpoint, we do a lot of Department of Defense-rated components, and each and every one of those, we believe, are helping support our troops and our allies’ troops.”

And Rex Heat Treat has been up for that task — and many others — since it opened its doors in 1938.

Post-World War II, the company, then known as J.W. Rex Company, became a major resource for heat-treating and manufacturing military ordnance shells for the U.S. Army and Navy.

The company continued to expand through the coming decades, adding manufacturing capabilities for missile cases, tooling for Chinook helicopters, and contracting with Boeing on several projects, to name a few.

In 1999, the company officially became Rex Heat Treat with facilities currently in Lansdale and Bedford, Pennsylvania, as well as a facility in Anniston, Alabama.

Through an ever-changing and expanding marketplace, the company has been recognized as one of the largest heat treaters in the Northeastern United States, according to Rex.

But it’s part of that project diversity that Rex said has kept things interesting throughout the company’s 80-year history.

“We’ve tended to be involved in new and unusual projects,” he said. “And so, I expect those kinds of things to continue to happen. I really do think that vacuum processing will continue to grow, and we’ll continue to grow vacuum processing here as well. Being a standard atmosphere heat treater for most of our history, we’re going to, probably, primarily focus on oil quenching and those kinds of operations that we believe are superior to gas quenching. Gas quenching is great in many ways, because if you’re just cooling the parts, you don’t have to go into oil. Plus, you minimize distortion. But, I think with our capabilities, we’re able to have a blend between gas quenching and oil quenching. If we have a forgiving material, we’re able to stagger that operation a little bit and minimize distortion.”

With all of Rex Heat Treat’s capabilities, not to mention its history of important jobs, it’s still surprising that the company’s name isn’t as well-known as it should be.

“We’re not a very vocal company about ourselves; we don’t do press releases, I feel like we’re almost one of the best kept secrets in heat treating,” Rex said. “I’ve had customers of ours contact us and they’re like, ‘You guys have awesome equipment, awesome services, and awesome capabilities, but I haven’t heard about you.’ Our sales are driven to us by the specifications, by the equipment we have, and the approvals we carry. We are very creative, and we think outside the box. We’re always going to keep on pushing, keep on driving and fighting to support our customers, and grow and build this business into the niche that we are.” 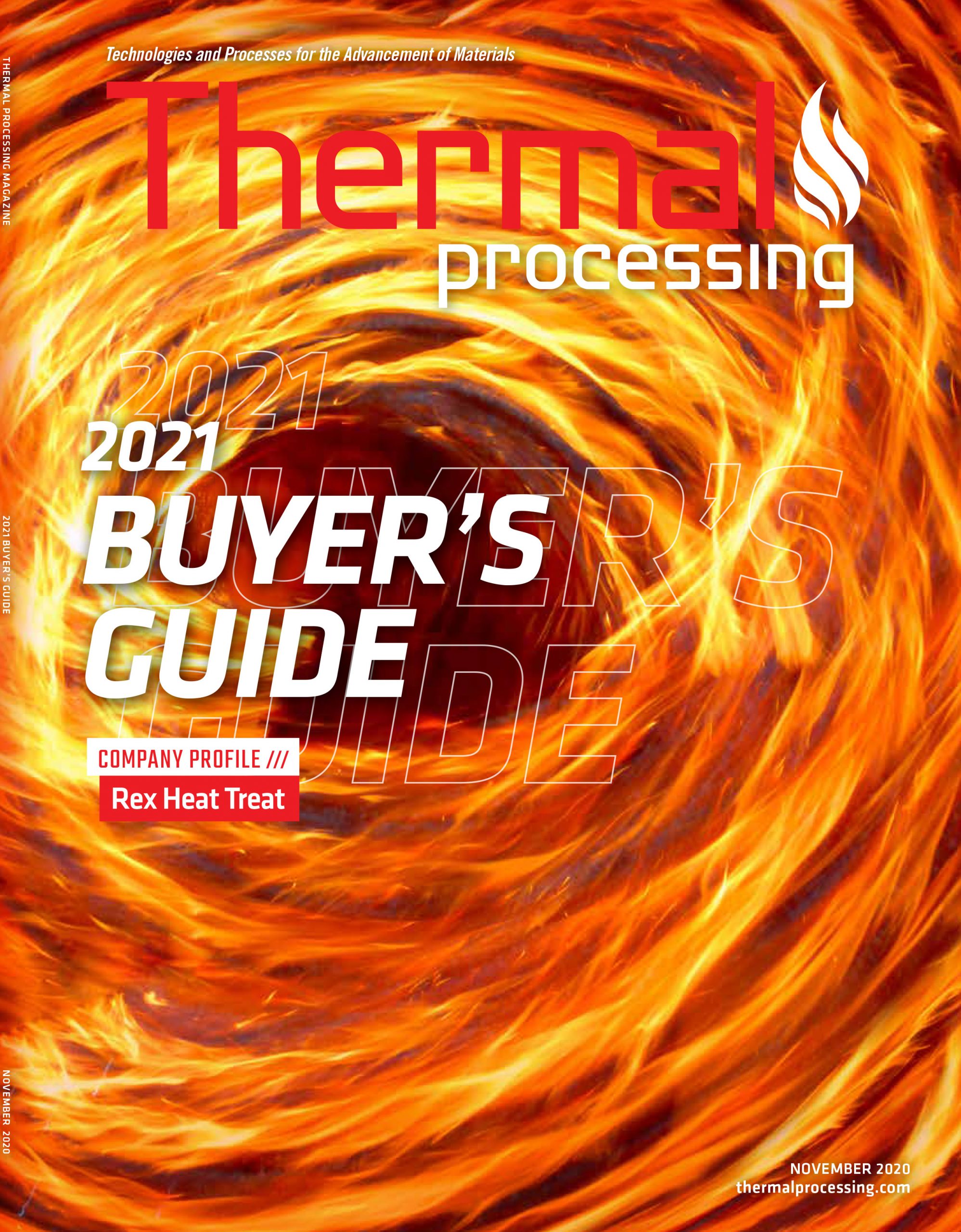