With a decades-long reputation for designing special industrial furnaces, ovens, kilns, quench tanks, and heat-treating systems, L&L Special Furnace Co., Inc. has manufactured some of the best heat-treating equipment for the industrial and laboratory world for more than 60 years.

Sometimes, big things can be born from a simple act of kindness. Such is the case with L&L Special Furnace Co., Inc.

But L&L’s humble origins began during World War II, when L&L’s owner and president Greg Lewicki’s mother employed about 20 displaced Eastern Europeans in her ceramics factory in Chester, Pennsylvania, where they helped decorate knick-knacks and mementos.

“At some point, she realized she was going to need a better kiln,” Lewicki said. “My father was working at the Sun Shipyard in Chester as a welder, and he looked at what was being offered on the market at that time and realized he could probably do a better job than they did. So, he talked to a buddy of his at the shipyard, and the two of them got together and decided they were going to make electric kilns. They started up a little company in 1946, L&L Manufacturing Company, and they made electric kilns for hobbyists. And my mother was the first customer.”

Not long after, Lewicki’s father became interested in industrial heat-treating furnaces, and he and his business partner started a smaller division inside of L&L Manufacturing Company called L&L Industrial Division. Later on, Lewicki’s father took the industrial division solo in the 1960s, where it became L&L Special Furnace Company.

In the 60 years since, L&L has earned a reputation for sophisticated engineering, quality workmanship, excellent documentation, and professional service, according to Lewicki.

“We pride ourselves on uniformity and precision and value in our electric and gas-fired heat-treating furnaces,” he said. “We manufacture some ovens for tempering. We don’t get into really low temperature ovens; it’s just not our thing because we’re not a sheet-metal house. We also manufacture quench tanks, some with load elevators and cooling systems, and furnace loaders.”

L&L offers a huge line of furnaces in all different sizes, according to Lewicki.

“We make commercial grade furnaces for bench top; we make a very nice line of little box furnaces for people who are just getting started in heat treating where they don’t have very big parts, and we go all the way up to pretty large chambers,” he said. “We make car bottom furnaces, shuttle furnaces, a very nice bottom loading, high-temperature furnace using molybdenum-disilicide elements. Our furnaces have temperature ranges from, I would say our sweet spot is about 1,800°F up to 3,000°F.”

On top of that range of product offering, L&L is able to customize them as well, according to Lewicki.

“Everything we make is customized to whatever the customer needs,” he said. “If the customer needs very high uniformity, we’ll provide element bank control. I’m not going to call it zone control because we don’t necessarily put thermocouples all over the place. That’s where we started, but we stopped doing that, since, with the Nadcap requirements, it would just take too many thermocouples to do what we used to do. Right now, what we do is we’ll have one thermocouple, and we’ll do a survey and with trim pots controlling the power controls for each element bank and still get a very tight uniformity depending on what the class requirements are.”

Because L&L has tried to stay ahead of technology, that has translated in the company’s product line being state-of-the-art for decades, according to Lewicki.

“We’re early adopters of different technologies,” he said. “We started CAD here when CAD first came out for small companies; that was back in the late ’70s, early ’80s. We actually talked to various control manufacturers. We saw the need for a PLC integrated with a temperature control a long time ago and talked to various manufacturers like Honeywell and Barber Coleman at the time, and we expressed a very strong interest in that kind of controller. When Honeywell came out with its UMC 800, I think we were their first customer.”

Lewicki pointed out that the UMC 800 has since evolved into a much more sophisticated controller, which the company still uses.

“We use that; we use an offering by Eurotherm called the E+PLC400,” he said. “We use that in certain applications. Our philosophy is to integrate what the control manufacturers have to offer, and we try to integrate all that into a very precise arrangement for a uniform heat-treating machine.”

With all that L&L has to offer, Lewicki emphasized that the company has had some interesting requests from customers over the years.

“One of them was a glass manufacturer in the market for a very uniform tube furnace they needed to calibrate their high-tech glass slugs,” he said. “The glass slugs needed to be five feet long, and we needed to have, of course, an entrance-end and an exit-end with enough of a margin so that the uniformity inside would be ±3°C. And in consultation with their engineers and our own resources, we got that furnace to ±1°C, and they’re still using it after 30 years.”

“It was a fairly large size, even for us; in fact, it was problematic getting the darn things shipped because of the height,” he said. “But we needed to get it up in the high-uniformity range because of the material they were processing. It was superconducting material that needed to be at the very same temperature all the way through its heating cycle of heating and cooling. And we developed a system with over 24 zones of control and a 5-horsepower fan and cooling tubes inside the chamber. This would get up to temperature at about 10°C per minute and cooling at ±5°C per minute. And we had ±1.5°C all the way up and down the inside of that six-foot chamber. That was a very proud achievement for us.”

Those are just two examples of how L&L finds unique and successful ways to satisfy its customers, although Lewicki said a majority of the jobs that come to L&L aren’t often as challenging. Even though, L&L gives each job 100 percent.

“A lot of customers have similar requirements, so we are able to sort of custom fit,” he said. “It’s almost like tailoring — tailoring our offerings to what the customer requires. And since we’ve done so many of these jobs over the years, we have a lot of options, a lot of different things we can do for people. We have inert atmosphere; we have combustible hydrogen atmospheres. Even if somebody needs an oxidizing atmosphere, we will supply a furnace with  hydrogen and oxygen in the same device.”

Even though L&L does make car bottoms, shuttle furnaces, and larger box furnaces, the company doesn’t typically involve itself in heavy automotive projects, according to Lewicki.

In addition to the heat-treating needs in the aerospace industry, L&L is involved in magnetic heat treating as well, building furnaces to heat treat magnets used by Fermi Labs for the critical magnets used in the CERN collider, as well as the heat processing of medical devices, precision ceramics, piezo ceramics, and precision glass annealing.

“We made furnaces for NASA to anneal a huge array of mirrors being sent into space,” Lewicki said.

L&L has about 20 employees for both office and factory, many of whom have been with the company for 10 years or more. Manufacturing and engineering are integrated in the company’s 17,000-square-foot facility south of Philadelphia, Pennsylvania.

A typical year’s production runs about 80 projects, some of which require more attention than others due to complex customer requirements, according to Lewicki. Some of these are standard products, which are in-stock and ready to ship. All of these jobs, the total now numbering in the thousands, are fully documented and supported by L&L’s expert staff.

“We’ve done these types of jobs for years, and it’s not old hat by any means,” he said. “Every situation we look at, we look at with fresh eyes.” 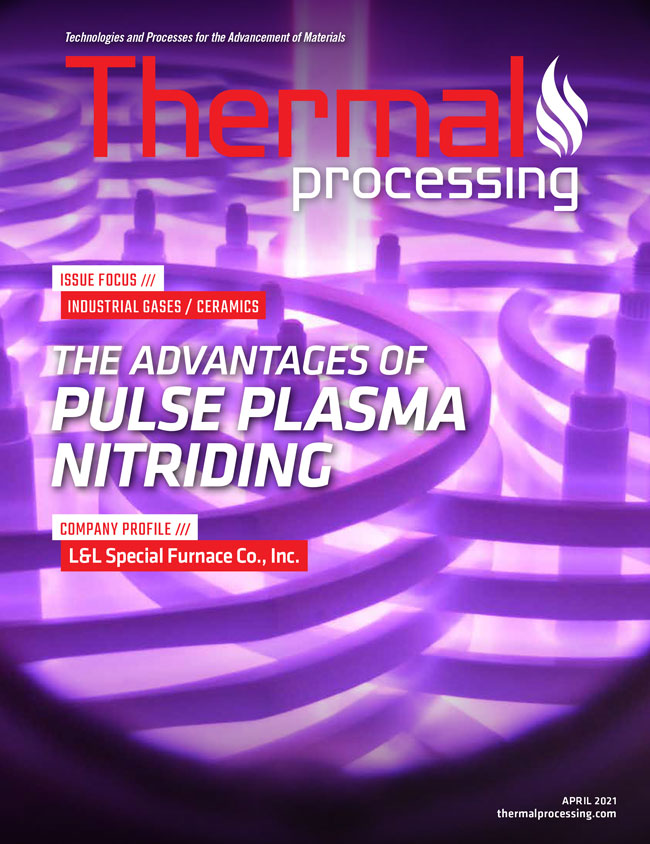