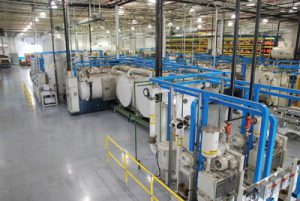 Bodycote plc, UK, reports that revenues in the six months to June 30 rose 5% from $464 million to $488 million.  However, revenues would have fallen had it not been for the contribution of businesses it bought, which added 7% to sales. One such business was the mid-October deal for Carolina Commercial Heat Treating, bought for $64 million. Pre-tax profits grew 10.5%, and the interim dividend was increased by 10%.

Mr. John D. Hubbard, CEO (retired), Bodycote plc, headquartered in Macclesfield, Cheshire, UK, is the recipient of the 2013 George H. Bodeen Heat Treating Achievement Award.
Established in 1996, this award recognizes distinguished and significant contributions to the field of heat treating through leadership, management, or engineering development of substantial commercial impact. Hubbard is recognized “For a lifetime of devotion to and advancement of heat treating by transforming numerous small localized commercial heat treat providers into a network of knowledgeable and technologically strong heat treating facilities to meet the needs of the worldwide manufacturing community.”

Hubbard worked nights at Warner & Swasey while earning a B.Sc. degree in metallurgical engineering at Cleveland State University. After graduating in 1970, he was appointed metallurgical engineer and promoted to manager of heat treating departments for six facilities. He received his MBA from Cleveland State in 1973 and was a part time adjunct professor for Business Ethics and Statistics at the university. He and a partner founded Furnace Services and Furnace Controls in Cleveland in 1973, and sold companies in 1976.He joined Hinderliter Heat Treating Inc., North American Heat Treating Group in 1976 as general manager, and became president in 1983. Bodycote plc acquired the company in 1996 and Hubbard became president of Bodycote’s North American Thermal Processing Div. In 2002, he became CEO of Bodycote plc, growing the company from 479m and 5700 employees to 730m and 11,000 employees in more than 300 facilities in 32 countries when he retired.
Hubbard was on the Board of Trustees for the Metal Treating Institute (1983–1986 and 1994–2002), and was MTI president (2000–2001). He was a Founding member of CHTE; was on the Heat Treating Society Board of Directors (1994–2000) and HTS president (2000–2001), and received the ASM Distinguished Life Member Award in 2005.