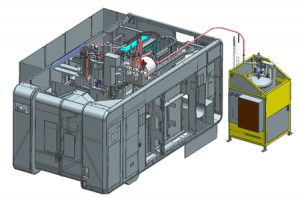 5ME® will showcase its cryogenic technology and production management software with high-profile partners at IMTS on September 12-17, joining forces with Mazak, Okuma, FFG MAG, Star SU, Fullerton Tool, Hydromat, Sunnen, Bosch Rexroth, and NUM to demonstrate the cost-saving and production benefits of cutting with cryo and digital management of the shop floor.

The revolutionary Variaxis i-800T with cryogenic machining technology will be unveiled at Mazak’s Booth #S-8300. The machine, a 5-axis VMC with a trunnion table and turning capability, manufactures high-value titanium aero engine components. 5ME and Mazak aim to launch cryogenic machining technology across numerous Mazak platforms and create a “designed for Cryo” machine tool by 2019 to coincide with Mazak’s 100-year anniversary.

At Booth #S-8500, 5ME and Okuma will offer 5ME’s cryo technology across numerous Okuma platforms, showcasing it on the MU-8000VL 5-axis VMC with trunnion table and turning capability. The machine is particularly suited for processing tough materials commonly used in aerospace part production, such as blisks and aero engine components. 5ME and Okuma look to tackle difficult-to-machine alloys for the aerospace industry as they collaboratively expand the application of this technology.

The Freedom software suite leverages the MTConnect standard and automatically extracts critical manufacturing data to produce web-based reports and analytics on asset utilization, availability, performance, quality, and OEE. It is brand, asset, and process agnostic. The software integrates seamlessly with ERP, MES, maintenance, and quality business systems and can be accessed anytime via smartphone or tablet device.