It does not matter what thermal treatment work piece requires, proper control is the foundation for repeatability and quality processing. For heat-treating processes, there are typically different types of control parameters that are continuously or discontinuously monitored to deliver the proper part metallurgy. Field devices are used to monitor the “process variable” that is tied into a controller, and the controller uses an algorithm to provide an action based on the deviation from the desired set point. The core control component for thermal processing is, of course, temperature, measured using a thermocouple.

Algorithms used for control are broad, but most thermal treatments use PID loop control. A PID controller is a control loop feedback mechanism. It is expected to control a process using only a process variable. Every application is different and requires specific settings and approaches. For example, parameters for heating a furnace electrically are vastly different than those for heating a furnace using gas burners. PID stands for proportional-integral-derivative, and the response of the control loop is entirely dependent on three terms:

Integral: This term is related to the accumulated past error of the system. Integral is typically expressed in repeats per minute or minutes per repeat. The “repeat” is the current (proportional) error. The integral is the sum of error over a period of time.

Derivative: The derivative term looks at the expected future error of the system. The derivative is applied based on the rate of change of the process variable. While most heating applications can function quite well with just the PI terms being used, the derivative term can help with a process that has a quick and sudden change (for example, opening an oven door and closing it). Derivative works in the opposite direction of the proportional term and acts as a dampener. 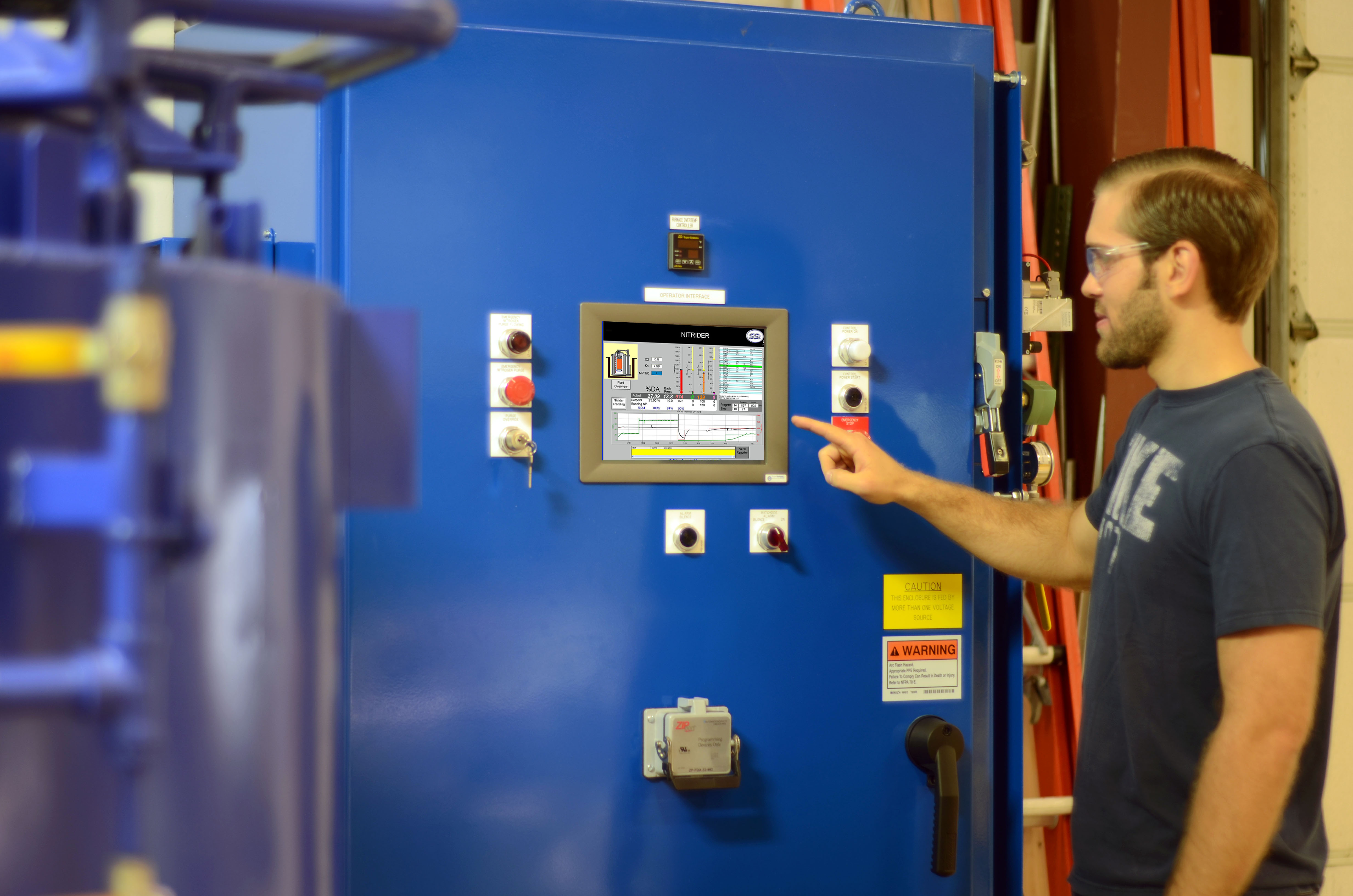 Heating systems can use two types of PID control: time proportioning or full proportional control. A system with on/off control (for example, a heating contactor applying full power when engaged or a gas valve fully opening when called for) is typically controlled by time-proportioning. With a time-proportioning signal, a cycle time is applied to the control loop, which will multiply the control variable output by the cycle time to calculate the control signal’s total on time.

PID control is also used for heat-treating processes that use atmosphere (or in some cases, lack of atmosphere). Sensors provide a reading that the controller will interpret as the atmosphere process variable, and then react based on the proportional control setup and PID values for that control loop. It is always ideal for the sensor to be reading the direct atmosphere that the work pieces are exposed to in order to provide optimal response to the changing environment. Oxygen sensors (a k a carbon probes), hydrogen analyzers, non-dispersive infrared analyzers, vacuum gauges, and flow meters all play a role in the different types of atmospheres control available for heat treatment.

Each heat-treating process as it relates to gas atmospheres typically has the ability to measure the composition of the gas using a sensor exposed to the work pieces in-situ or through a sampling of the atmosphere. The control parameter for the atmosphere is an attribute of the process. For example, for ferritic nitrocarburizing (FNC), the industry specification AMS 2759/12 calls for the control of the nitriding potential (Kn). The output of the control loop setup for FNC would typically control the addition of ammonia and/or dissociated ammonia to meet the Kn set point. Kn is commonly calculated using an analyzer that calculates the percentage of hydrogen in the atmosphere, but it will also require information about the flow of additional gases influencing the total hydrogen measured (not just hydrogen from the breakdown of ammonia). Although the PID algorithm is still evaluating just one data point and providing an output to control the gases, the controller requires the logic to calculate multiple data points for that specific process variable.

Proper control delivers attributes necessary to produce correct metallurgical results in a productive and predictable environment. PIDs define a properly “tuned” furnace, which is necessary to meet uniformity requirements for CQI-9 or Nadcap. The PID parameters are a significant part of making the temperature uniform without exceeding top end temperature tolerances and also ensuring that the atmosphere stays in the necessary boundaries for control. In past articles, out-of-control furnaces were discussed both from an atmosphere and temperature standpoint where a negative impact was highlighted when operating outside control parameters. The PID algorithms are the first step to ensure control to the setpoint and managing variation from setpoint.

The paradox of work and happiness

Understanding the technology is key to proper use

‘Say what you do, do what you say’

You can’t overlook the process

A brief history of the non-ferrous alloy aluminum