The proper heat treatment of metals is a critical step for many areas of metals manufacturing. If the temperature is too low or too high, it can mean lost production time, as well as lost revenue.

Optris IR Sensing has developed infrared sensors that are able to ensure quality temperature without touching the metal itself.

“Metals need to be at the right temperature in many phases in the manufacturing process,” said Tom Scanlon, president and general manager of Optris IR Sensing. “It could be quenching, or it could be prior to a stamping process or after the metal has come out of an induction heating process. You don’t get a good quality part if it’s not tempered at the right temperature. You don’t get a good quality part if you’re stamping an impression on a metal part that is not hot enough — or maybe it’s too hot. In most of these applications, it is very impractical and difficult to understand what the temperature is with some kind of contact temperature measurement device touching it, for example. That’s a problem. There are thermocouples, of course, but you burn through your contact thermocouples very quickly on high-temperature metals. It’s a lot more convenient to try and understand what the temperature is without touching it. And that’s where remote infrared sensing has a special place in the heat-treating market.”

Non-contact temperature measurement relies on the premise that all materials emit infrared energy, according to Scanlon.

“This is a challenge, frankly, for us to figure out how to measure the temperature on metal surfaces because metal surfaces don’t behave like plastic or glass or carbon fiber or other materials that emit their energy very efficiently,” he said. “Metal materials are rather inefficient in emitting their infrared energy. Depending on their temperature, they can reflect a very large portion of their heat energy to a remote sensor. So, we have found, in work over the years, that at certain wavelengths, sensors do a better job of addressing this particular phenomenon.”

To tackle this phenomenon, Optris has discovered how to measure the temperature on a surface that inherently is not ideal by using a remote sensing device, according to Scanlon. To that end, the company creates and supplies highly engineered and sophisticated German products that are well calibrated.

“We don’t sell these products at extreme gross margin,” he said. “They’re very value priced, but they’re not inexpensive products that we import from China that maybe don’t quite measure up to their specifications. These are well engineered, and these are products that work. And they’re really at reasonable prices.”

Optris doesn’t just make the infrared sensors, but it also manufactures infrared cameras as well, according to Scanlon.

“Infrared sensors have been used for a long time as spot sensors that allow you to measure the temperature of one small area that you’re targeting,” he said. “But let’s say that you have a metal part that happens to vary in temperature from one side to the other — maybe the center of the part is at the right temperature, but the edge of the part isn’t. That’s going to affect the quality of the part in that particular area.”

Infrared cameras can go above and beyond a simple, infrared sensor, according to Scanlon.

“The advantage of a camera is that I can look at a whole image, and I can say, ‘Wow, look at that color right there; it’s purple. The temperature variation between the center and the edge of that part is 180 degrees Fahrenheit, which is outside this guy’s quality parameter,’” he said. “These cameras used to go for $50,000, so many customers would shy away from them, but they’re now much more affordable with the cost of the detectors going down. We can sell this camera for around $5,000. And instead of getting one sensor, one measurement, he gets, in this case, about 400,000-pixel elements. Each one is a temperature measurement point.”

Assistance always at the ready

Scanlon is quick to point out that customers needing help with a challenge can always find someone at Optris who has the knowledge and expertise to assist them.

“When you call here, and you have some questions — say, you’ve got a billet, and the temperature is 1,700 degrees Fahrenheit, and you’re going to be mounting a sensor 12 feet away, and the ambient temperature is going to be 160 degrees where the sensor is going,” he said. “You have a lot of questions about what sensor is going to be right for you. You can always find an applications engineer here who can answer those questions and point you toward the right sensor. We sell a lot of sensors to customers who haven’t had that guidance, and we find out what they’re using. They’re getting bad measurements, and there was no effort made on the part of the previous vendor to make sure they were into the right sensor system. We pride ourselves on understanding the application and guiding the customer to the solution that presents the best and most accurate measurement on its target.”

Potential customers typically may discover Optris’ expertise with a simple Google search on high temperature metals measurement, according to Scanlon.

“We have a lot of content on that specific topic, heat treating, etc.; we buy the right keywords so process engineers can find us,” he said. “Many of them will send in emails to start, and when we respond with some interesting content and illustrations, and maybe even some thermal images that show them what a metal billet looks like just before it moves from an induction heating process into a stamping process, they begin to appreciate us as a company that knows what it’s doing. We’ll send white papers that provide some technical background for the suggestions that we’re making. And then, frequently, a follow-up phone call or a Zoom call might ensue where we’ll begin to dig into the specifics of the customer application.”

How it all began

Before joining Optris, Scanlon said he had been working for more than 35 years in the infrared temperature measurement industry. Most of that time was spent with FLIR systems, an infrared company that specializes in making sensors that weren’t ideal for high temperature metals measurement.

“Optris sells into a wide variety of markets, so I was able to leverage the experience I had with FLIR in order to apply the Optris technology in markets where short wavelength measurement of metals is not necessary,” he said. “The change that I experienced in joining Optris is that, for the first time, I began to appreciate how you could use the special shortwave technology and ratio technology to accurately measure metal temperature. And in 33 years, in working for another infrared camera company, I had essentially resolved that this could not be done and deliver accurate measurements. And this was true because the sensor technology we had at FLIR was not really optimal for high temperature metals measurement. So, I went through this kind of learning process in 2017 and came to appreciate how you could do that with the right sensor technology, because Optris had been doing it for 16 years. And the people that joined the company, initially, 16 years ago, brought with them over 10 to 20 years of experience. There was a long history of expertise in high temperature metals measurement that I had an opportunity to leverage when I came on board in 2017 and started this business.”

Optris IR Sensing is a U.S. company that is part of the German-based Optris that began in Berlin 16 years ago by Dr. Ulrich Kienitz, who was manager of the Fluke and Raytek process instruments business throughout Europe, according to Scanlon.

“They brought an awful lot of infrared experience and competence in figuring out how to use infrared remote sensors to accurately measure the temperature of a wide variety of materials — everything from metals to plastics to glass,” he said. “There was a kind of a very special expertise in understanding what sensors you would need and how to calibrate those sensors so they can deliver accurate temperature measurements in challenging industrial environments. That’s the background of the German company.”

In an effort to establish a foothold in the U.S., Kienitz recruited Scanlon and Scanlon incorporated Optris IR Sensing, LLC in 2017.

“I own the business, and we partner,” he said. “But I don’t engineer or manufacture the products here in the States. I set up the distribution channels and support customers in their technical questions to make sure we’ve got a good fit with the sensor systems they may need. We actually do manage installations of those sensors on production lines here throughout the U.S.”

As part of that installation process, Scanlon recalled a recent job where Optris was brought in to help with a steel mill.

“They bought eight camera systems with substantial cooling jackets, as we call them, because they were going to go into hot areas,” he said. “They were buying these to protect the plant and the plant workers from refractory failure, or breakout, where the metal can actually pour out of the vessel onto the floor. This is not a good thing. Production shuts down for months, and employees’ safety is compromised. We went in there, and we managed the installation of eight cameras at different locations that are always looking at these vessels to make sure they’re not in a dangerous temperature zone. It’s not just selling a sensor. Sometimes, it’s actually traveling to the site and installing these sensors so they deliver their promise to a group of process engineers who may know a lot about their process but might need some help with our cameras and setting up the software for potentially alarming scenarios.”

As Optris continues to make advancements in the field of infrared sensors and cameras, Scanlon said he expects to see fewer companies depending solely on one-spot sensing.

“We have developed newer cameras that actually have the form factor and the design language of some of the older spot sensors; they’re fairly narrow, and they’re much smaller than the boxier camera designs,” he said. “Companies will decide they really need more information on the temperature of their parts, so why not buy an affordably priced infrared camera that delivers temperature information on hundreds of thousands of spots on a target, rather than just one. Optris is really leading in that transition — from single spot to full area temperature measurement. And I see this happening in metals.”

This will be particularly crucial in the ever-growing 3D printing process, according to Scanlon.

“Many, many metal parts in the future will be made by 3D metal deposition,” he said. “If you’ve ever seen a 3D printing process, this printing head is traveling all around, and it’s taking this fine powderized metal and depositing it with a plasma spray over an area, creating a part, small layer by small layer. That interface between the depositing head and the base material is critical. That temperature is very critical. And you can imagine how difficult it is to measure that temperature with a spot device, as this head moves all around. So, an infrared camera is ideal for the emerging 3D metal printing market. It’s also ideal for some of the older markets, as I’ve described. Metal is not made in one spot. Metal is made in three dimensions, and understanding what the temperatures are on the entire part is going to be a significant change in the way quality is controlled in heat-treating processes.” 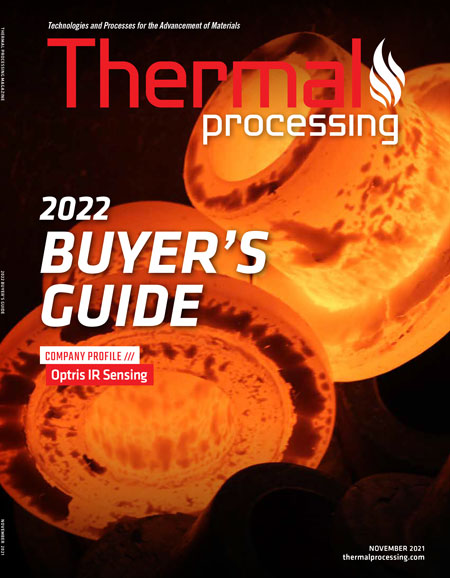