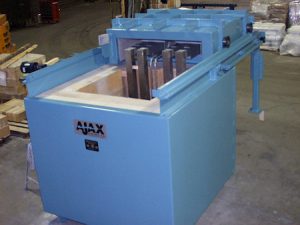 Ajax TOCCO Magnethermic successfully started up the Phase Two galvanizing equipment for an automotive line at a major steel producer in Europe. The line is now able to produce galvanized strip with two types of coating alloy.

In 2009 Ajax TOCCO Magnethermic supplied and commissioned the Phase One of the project working in conjunction with a major steel industry line builder, which consisted of the following.

•Coating pot with a zinc capacity of 350T which was rated at 1000kW and equipped with two 500kW “TE” Jet-flow inductors. The coating pot was statically mounted on the Lift Platform initially, but designed to allow for easy integration of transfer bogie wheels for mobilization in Phase Two
•Hydraulic lift platform for raising and lowering the coating pot between the operating and the down (off-line) positions, allowing for easy and safe access to the snout for maintenance work.
•Platform / pot movement control panel was designed and supplied for dual pot capabilities, allowing quick conversion from Phase One to Phase Two
•Snout access platform that also operated as an insulating cover for the coating pot when in the down (off-line) position. The snout access platform was mounted to the ceiling of the cellar on rails and motorized to allow movement over the coating pot when it is in the down (off-line) position. This meant maintenance on the snout could be performed safely above the coating pot.
•7 T/h ingot charger, with close loop with metal level detector to keep constant metal level in the pot +-2mm. The charger was designed with an 8 ingot storage conveyor system.

In 2012 the customer awarded Ajax TOCCO Magnethermic directly with an order for the Phase Two conversion, which included adding a second coating pot for Zinc Aluminum Magnesium alloy. The Phase Two equipment, supplied and commissioned in 2013, consisted of the following.

ET ’22 is a comprehensive event that addresses virtually every facet of the aluminum extrusion industry through its quality programming. With aluminum extrusions expected to see growth in the residential, automotive, aerospace, and construction markets, Nitrex turnkey gas nitriding systems and proven NITREG® technologies optimize die performance to achieve greater throughput capacities. This also means that users have full control of the nitriding process for product quality and consistency, faster turnaround, and reduced die production costs.

The leading North American technical conference on powder metallurgy and particulate materials, PowderMet2022 is a hub for technology transfer for professionals from every part of the industry, including buyers and

The leading North American technical conference on powder metallurgy and particulate materials, PowderMet2022 is a hub for technology transfer for professionals from every part of the industry, including buyers and specifiers of metal powders, tooling and compacting presses, sintering furnaces, furnace belts, powder handling and blending equipment, quality-control and automation equipment, particle-size and powder-characterization equipment, consulting and research services, and more.

Thermal Management Expo brings together senior engineers and decision makers with suppliers of thermal systems and materials to discuss the latest innovations and solutions for thermal management across automotive, aerospace

Ceramics Expo brings together engineers, decision makers, end-user OEMs and buyers from across the globe to source new materials, components and technologies, network with

Ceramics Expo brings together engineers, decision makers, end-user OEMs and buyers from across the globe to source new materials, components and technologies, network with like-minded professionals, and discuss the challenges and opportunities in the ceramics industry.

Running concurrent to the exhibition is the free-to-attend Ceramics Expo Conference, where industry leaders will share their technical expertise in ceramics and provide real-world case studies, new technologies and materials, along with information on industry trends.

The Huntington Convention Center of Cleveland