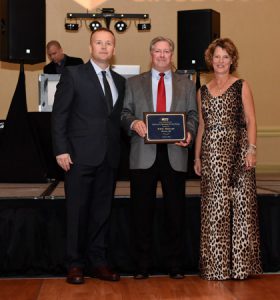 At its October Fall Meeting in Nashville, Tennessee, the Metal Treating Institute (MTI), the world’s largest network of heat treaters in the world, recognized AFC-Holcroft from Wixom, Michigan, with the Associate Member of the Year Award.

Each year at its Fall Meeting, MTI recognizes the supplier within its membership who has exemplified the highest levels of support and service to MTI members and the Institute with their expertise, service, and commitment to the mission and objectives of the Metal Treating Institute.

AFC-Holcroft has played an instrumental role in delivering its expertise as a supplier serving MTI members and the heat treating industry.

“MTI has been able to serve the heat treating industry at the highest levels due to the support of suppliers members like AFC-Holcroft,” said MTI Awards Chairperson Jackie Peters. “The award was well-deserved.”

President Bill Disler accepted the award on behalf of AFC-Holcroft.

AFC-Holcroft has been an MTI member since 2008 and is engaged at many levels of MTI serving as a Diamond Member Supplier and exhibiting at MTI’s trade show, Furnaces North America. AFC-Holcroft also has graduated a few of their key executives from MTI’s industry-leading YES Management Training Program.

MTI, established in 1933, is an international nonprofit trade association for the heat treating industry based in Jacksonville, Florida, with members in 38 states and six countries.

ET ’22 is a comprehensive event that addresses virtually every facet of the aluminum extrusion industry through its quality programming. With aluminum extrusions expected to see growth in the residential, automotive, aerospace, and construction markets, Nitrex turnkey gas nitriding systems and proven NITREG® technologies optimize die performance to achieve greater throughput capacities. This also means that users have full control of the nitriding process for product quality and consistency, faster turnaround, and reduced die production costs.

The leading North American technical conference on powder metallurgy and particulate materials, PowderMet2022 is a hub for technology transfer for professionals from every part of the industry, including buyers and

The leading North American technical conference on powder metallurgy and particulate materials, PowderMet2022 is a hub for technology transfer for professionals from every part of the industry, including buyers and specifiers of metal powders, tooling and compacting presses, sintering furnaces, furnace belts, powder handling and blending equipment, quality-control and automation equipment, particle-size and powder-characterization equipment, consulting and research services, and more.

Thermal Management Expo brings together senior engineers and decision makers with suppliers of thermal systems and materials to discuss the latest innovations and solutions for thermal management across automotive, aerospace

Ceramics Expo brings together engineers, decision makers, end-user OEMs and buyers from across the globe to source new materials, components and technologies, network with

Ceramics Expo brings together engineers, decision makers, end-user OEMs and buyers from across the globe to source new materials, components and technologies, network with like-minded professionals, and discuss the challenges and opportunities in the ceramics industry.

Running concurrent to the exhibition is the free-to-attend Ceramics Expo Conference, where industry leaders will share their technical expertise in ceramics and provide real-world case studies, new technologies and materials, along with information on industry trends.

The Huntington Convention Center of Cleveland